BEIJING - China will open up more sectors and give greater emphasis to opening up based on rules, said Chinese Premier Li Keqiang on Tuesday (March 5).

Mr Li assured foreign companies that they will be treated as "equals" as Chinese companies.

"We will further align our policies with internationally accepted trade rules, enhance policy transparency and consistency in implementation," he said at the opening of the annual session of the national parliament, National People's Congress.

However Mr Li stopped short of offering details on how China will "further relax controls over market access" and what specific sectors will be opened up for wholly foreign funded enterprises.

Earlier in delivering the government's work report, Mr Li reiterated pledges by Chinese leaders that intellectual property rights protection will be strengthened and the system for punishing offenders will be improved.

At this year's gathering, the lawmakers are set to approve a new foreign investment law that bans forced technology transfers and illegal government "interference" in foreign companies.

It will replace three existing ones that regulate joint ventures and wholly foreign-owned enterprises. 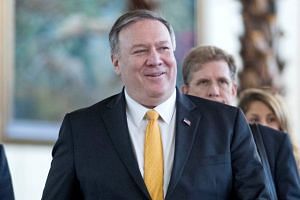 US, China 'on the cusp' of possible end to trade war

China's national champions are vulnerable too

The new law comes as China and the United States work towards sealing a trade deal to end an on-going trade war. The US has complained about unfair trade practices by China, which include stealing intellectual property as well as forced technology transfer.

While it is common for laws to take months or years to be formally approved, Chinese lawmakers have fast-tracked the passing of this particular law, in part to create favourable conditions to resolve trade disputes with the US, said observers.

The European Union Chamber of Commerce in China has expressed concerns over this, with its president Mr Mats Harborn saying that "the drafting process must be given the time and attention" and "proper consultation periods should be respected".

While Mr Li did not mention the new law in his speech, he said China "will strengthen efforts to protect foreign investors' legitimate rights and interests".

"China's investment environment is all set to get better and better, which more and more business opportunities for foreign companies are a sure thing," he added.