BEIJING - China is committed to peaceful development and will not create chaos for the world but, on matters relating to its sovereignty, it would not give up "even an inch" of its territory, Chinese President Xi Jinping told visiting US Defence Secretary James Mattis on Wednesday (June 27).

Mr Xi met Mr Mattis - the first Pentagon chief to visit Beijing since 2014 - at the Great Hall of the People.

Mr Xi said that China was neither expansionist nor seeks to colonise others but its position was "firm and clear" on issues relating to its sovereignty and territorial integrity.

"We cannot lose even an inch of the territory left behind by our ancestors. At the same time, we do not want even a tiny bit of what belongs to others," Mr Xi was quoted as saying in a China Central Television news report.

He added that the Pacific Ocean was vast enough to accommodate both the United States and China as well as other countries.

Beijing has laid claim to almost the entire South China Sea within a so-called "nine-dash line" that it says it has historically exercised control over.

The Chinese claim overlaps with others by four Asean nations - Brunei, Malaysia, the Philippines and Vietnam - and Taiwan. 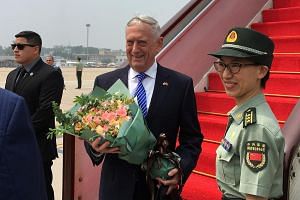 Mattis becomes first US defence chief to visit China since 2014

Mr Mattis' visit comes at a time of rising tensions between the US and China over issues including trade, the South China Sea and Taiwan.

The former general was publicly critical of Beijing's moves to militarise islets in the South China Sea at the Shangri-La Dialogue in Singapore earlier this month, saying that China's aim was "intimidation and coercion".

As a result of Beijing's actions, China was disinvited from the Rim of the Pacific Exercise (RIMPAC), a US-led multinational naval exercise that began on Wednesday in Hawaii.

Another source of irritation has been US action on Taiwan, which Beijing considers a renegade province. Earlier this year, the US passed a law allowing the exchange of high-level officials with Taiwan.

Ahead of Mr Mattis'  visit, Chinese media reported that Chinese warships had been holding daily combat drills for more than a week in waters near Taiwan.

Still, both Chinese analysts and state media  flagged the Pentagon chief's visit as a sign that both countries were willing to find common ground amid their differences.

Mr Xi said  that both countries should advance bilateral ties based on the "principle of mutual respect and win-win cooperation", noting that military ties could be a source of stability for relations.

Mr Mattis echoed Mr Xi, saying that the US placed great importance on military and bilateral ties with China.

Both men also stressed the importance of controlling risks to avoid conflict and confrontation.

Mr Alexander Neill, senior fellow at the International Institute for Strategic Studies, said the importance of controlling risks and managing escalation would have been a key part Mr Mattis' meetings with Chinese leaders, given the likelihood of increasing encounters between the US and Chinese navies, particularly in disputed areas of the South China Sea.