BEIJING/MANILA (AFP, Reuters) - China warned its rivals Wednesday (July 13) against turning the South China Sea into a “cradle of war” and threatened an air defence zone there, after its claims to the strategically vital waters were declared invalid.

The surprisingly strong and sweeping ruling by a UN-backed tribunal in The Hague provided powerful diplomatic ammunition to the Philippines, which filed the challenge, and other claimants in their decades-long disputes with China over the resource-rich waters.

China reacted furiously to Tuesday’s decision, insisting on its historical rights over the sea while launching a volley of thinly veiled warnings to the United States and other critical nations.

“Do not turn the South China Sea into a cradle of war,” vice foreign minister Liu Zhenmin told reporters in Beijing, as he described the ruling as waste paper.

“China’s aim is to turn the South China Sea into a sea of peace, friendship and cooperation.”

Liu said China also had “the right” to establish an air defence identification zone (ADIZ) over the sea, which would give the Chinese military authority over foreign aircraft.

A similar zone set up in 2013 in the East China Sea riled Japan, the United States and its allies.

“Whether we need to set up one in the South China Sea depends on the level of threat we receive,” he said.  “We hope other countries will not take the chance to blackmail China.” 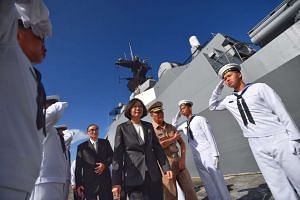 The Chinese ambassador to the United States, Cui Tiankai, was even more blunt over the ramifications of the verdict.  “It will certainly intensify conflicts and even confrontation,” Cui said in Washington on Tuesday.

China justifies its sovereignty claims by saying it was the first to have discovered, named and exploited the sea, and outlines its claims for most of the waterway using a vague map made up of nine dashes that emerged in the 1940s.

Those claims overlap with those of the Philippines, Vietnam, Malaysia, and Brunei.

Manila, under previous president Benigno Aquino, launched the legal case in 2013 after China took control of Scarborough Shoal, a rich fishing ground within the Philippines’ exclusive economic zone and far away from the nearest major Chinese landmass.

China has repeatedly said it does not recognise the legitimacy of the Hague tribunal nor its ruling.

On Wednesday, Defence Minister Chang Wanquan said in a meeting with the EU’s foreign policy chief Federica Mogherini that Beijing’s sovereignty over the South China Sea will not be affected by the tribunal's decision, Xinhua news agency said.

State media called the tribunal a "puppet" of external forces. China has repeatedly blamed the United States for stirring up trouble in the South China Sea.

"China will take all necessary measures to protect its territorial sovereignty and maritime rights and interests," the ruling Communist Party's official People's Daily said in a front page commentary on Wednesday (July 13).

The case, overseeing an energy-rich region that is home to also one of the world's busiest trade routes, has been seen as a test of China's rising power and its economic and strategic rivalry with the United States.

Beijing called the Philippines claims of sovereignty in the South China Sea "baseless" and an "act of bad faith".

In a government white paper published on Wednesday China also said its fishing boats had been harassed and attacked by the Philippines around the Spratly Islands.

"On whether China will set up a air defence zone over the South China Sea, what we have to make clear first is that China has the right to...But whether we need one in the South China Sea depends on the level of threats we face," the Vice Foreign Minister Liu Zhenmin told reporters in Beijing, adding that China hopes to return to bilateral talks with Manila.

US officials have previously said they feared China may respond to the ruling by declaring an air defence identification zone in the South China Sea, as it did in the East China Sea in 2013, or by stepping up its building and fortification of artificial islands.

China's Liu also took aim at the judges on the tribunal, saying that as not one of them was Asian they could not possibly understand the issue and it was unfair of them to try.

The Philippines reacted cautiously to the ruling late on Tuesday, calling for "restraint and sobriety".

Philippine President Rodrigo Duterte held a Cabinet meeting after the ruling was announced, but no comment was made about the what was discussed and the presidential palace cancelled a regular briefing on Wednesday.

One of the lawyers who argued the Philippines' case said that though the decision had been delivered, how and when the country would enforce the decision was complicated and unclear.

"There's no timeline for this game, it might have an extended period of gestation," said Florin Ternal Hilbay, a former solicitor general. "I would assume our diplomats have read the decision and understand the complexities and consequences of enforcing the decision." 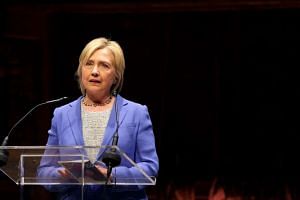 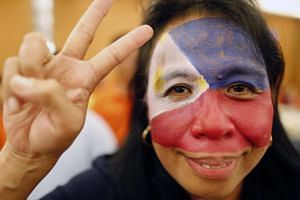 Global intelligence firm Stratfor said fishermen from China or the Philippines were the greatest potential disruptors in the region, beyond the easy control of law enforcement.

"The greatest struggle for both countries will be to rein them in, preferably before they get to sea, lest they disrupt the delicate peace," Stratfor said in a note.

In moves likely to antagonise Beijing, the coastguards of Japan and the Philippines took part in simulated rescue and medical response exercise off Manila Bay on Wednesday, part of what the two countries have called efforts to improve maritime security and combat crime and piracy.

Japan and China are involved in a separate territorial dispute in the East China Sea and Beijing has warned Tokyo against meddling in the South China Sea dispute. 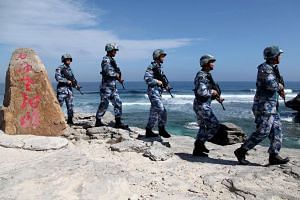 Asia in the past few years. Cui Tiankai said the arbitration case "will probably open the door of abusing arbitration procedures.

"It will certainly undermine and weaken the motivation of states to engage in negotiations and consultations for solving their disputes," Cui said at a forum of the Center for Strategic and International Studies (CSIS) in Washington.

"It will certainly intensify conflict and even confrontation."

President Barack Obama's top Asia policy adviser, Daniel Kritenbrink, said the United States had no interest in stirring tensions in the South China Sea as a pretext for involvement in the region.

"We have an enduring interest in seeing territorial and maritime disputes in the Asia Pacific, including in the South China Sea, resolved peacefully, without coercion and in a manner that is consistent with international law," Kritenbrink said at the same forum.

Taiwan President Tsai Ing-wen boarded a navy frigate in southern Taiwan ahead of its departure for the South China Sea early on Wednesday, a regular patrol mission that was pushed forward by a day due to the Hague decision, which Taipei rejected. "This patrol mission is to show the determination of the Taiwan people to defend our national interest," Tsai said from the warship.