HONG KONG (BLOOMBERG) - China and the United States are pulling out all the stops before a court ruling on China's territorial claim to a large part of the South China Sea, with a flurry of diplomatic and military activity across South-east Asia in recent weeks.

The stakes are high. While the international tribunal's decision on the case brought against China by the Philippines isn't enforceable, it could create momentum either for or against Beijing, which has been busy reclaiming land in a waterway that hosts more than US$5 trillion (S$6.8 trillion) of trade a year.

The matter being considered by the tribunal in The Hague more than 10,000 km from the South China Sea goes to the heart of the strategic rivalry between the US and China in the western Pacific. 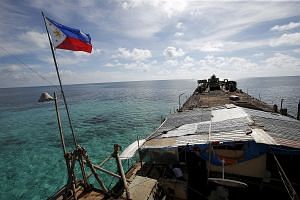 For China and the US, which is not a claimant but has positioned itself as the champion of freedom of navigation in the area, the race is on to win the support of as many nations - large and small - as possible before the decision is handed down.

"If you think in terms of a chess board, everyone is moving pieces around in anticipation of the next phase of events in the South China Sea emerging from that PCA finding," said senior analyst Malcolm Davis at the Australian Strategic Policy Institute in Canberra, referring to the Permanent Court of Arbitration.

Senior officials have been busy. China's top military officer recently visited Fiery Cross Reef - about 500 km from the Philippines - along with a group of singers to entertain troops.

Foreign Minister Wang Yi has roped in Russia and countries as diverse as Gambia and Poland to support China's argument that the tribunal has no jurisdiction and disputes should be solved bilaterally. The country even made a botched effort to get Fiji to back its position, and its ambassadors are demanding outsiders stop meddling.

Meanwhile US Defence Secretary Ash Carter joined an aircraft carrier in its patrol of the waters, shortly after agreeing to a beefed up agreement that lets US troops rotate through military bases in the Philippines for the first time in decades.

The USS William P. Lawrence, a warship, sailed this week through the 12-nautical-mile territorial zone around Fiery Cross Reef, where China has completed an airstrip.

The Philippines is only one of several South-east Asian claimants in the South China Sea - others include Malaysia and Vietnam - but it has been the most vocal. Since it turned to international arbitration in 2013, China has built more than 3,000 acres of land on seven features in the area, and its coastguard and naval vessels have become a more frequent presence.

Asean Unity Part of the diplomatic flurry is aimed at the Association of South-east Asian Nations (Asean), the central voice through which countries in the region speak on the South China Sea. So far Asean has avoided criticising China by name, while calling for tensions to be minimised.

China is keen to keep it that way - and just needs one Asean member to side with it to do so. China's trade with Asean in 2014 was more than US$360 billion, well above the US.

Others including the US are stressing the need for a firm, united Asean response to the arbitration ruling.

So Chinese and US diplomats are criss-crossing the region. Mr Wang met leaders of Brunei, Cambodia and Laos and this week top diplomat Yang Jiechi visited Malaysia and Indonesia. Mr Daniel Russel, the senior US diplomat for East Asia, finished a swing through Laos, Vietnam, and Malaysia on May 12.

President Barack Obama visits Vietnam this month before traveling to Japan for a Group of Seven (G-7) summit, where he may seek endorsement of the tribunal's legitimacy.

If The Hague ruling is not in China's favour the country, given its refusal to participate, will almost certainly reject the outcome. The question then becomes how it responds.

At one extreme, it may choose to ratchet down tensions by halting construction on the features it already occupies.

At the other end of the scale, it may start building an island on the Scarborough Shoal, seized from the Philippines in 2012, and a prospect raised by chief of naval operations Admiral John Richardson in March. The uninhabited shoal lies several hundred kilometers from Manila in an otherwise mostly empty area of the South China Sea.

Chinese radar, aircraft and missiles based on Scarborough would be able to reach Manila as well as bases to be used by US forces. Building on the shoal would be the "final nail in the coffin" for Asean-based efforts to manage the tensions, according to Mr Zack Cooper, a fellow at the Centre for Strategic and International Studies in Washington.

A wild card is this week's election of Mr Rodrigo Duterte as Philippine president. Mr Duterte has given mixed messages, indicating he may negotiate with China or, at the other extreme, take a jet ski out to personally lay claim to a disputed feature.

"Either way it could give the Chinese a way out," said Mr Cooper. "On the one hand they could say 'it is the Philippines that is breaking the rules and norms,' or they could say 'Beijing and Duterte have come to an understanding and the PCA decision doesn't matter at all'."