TAIPEI (REUTERS) - China has too many other issues to worry about at the moment - from protests in Hong Kong to a slowing economy - to give much thought to Taiwan, Taipei Mayor Ko Wen-je said on Thursday (Dec 5).

China claims self-ruled Taiwan as its own territory, to be brought under Beijing's control by force if necessary. It regularly calls Taiwan the most sensitive issue in China-US ties, Washington being Taiwan's main arms supplier.

But Ko, who is sometimes seen as a potential future Taiwan president, said that while Taiwan was important to China, it was not currently the "core issue" that Beijing likes to portray.

"They say that Taiwan is a core issue, but I'm very clear that it isn't. Taiwan is not China's core issue," he said.

"In comparison to Hong Kong, to Xinjiang, Taiwan is not on the top of the priority list. For mainland China, there are their economic problems, their GDP growth has already fallen to below 7 per cent," Ko said in a Reuters interview, where he switched between Mandarin and English.

Hong Kong has been rocked by anti-government protests for nearly six months, the biggest challenge to President Xi Jinping since he took charge in 2012. Beijing has also come under international opprobrium for locking up a million or more Muslim Uighurs in western China's Xinjiang region as part of what it calls a de-radicalisation programme.

In any case, Ko said, the United States - Taiwan's most important international backer even in the absence of diplomatic ties - would not let Taiwan become formally independent or be taken over by China.

While the 60-year-old Ko had decided not to run for the presidency for elections scheduled for Jan 11, the position he holds is traditionally a stepping stone to the presidency. The three presidents preceding current leader President Tsai Ing-wen all served as Taipei mayor.

If Tsai wins re-election - and polling is on her side - she cannot then stand for a third term in 2024. 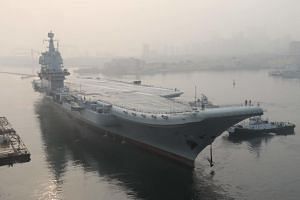 In face of China threat, Taiwan to invite US experts to bolster defences

China holds out carrot ahead of Taiwan election, but few convinced

Ko, who this year formed a new political party, the Taiwan People's Party, said it was still too early for him to say if he would run in 2024, adding he would decide when his mayoral term runs out in three years' time.

"Do what you should do now and let God decide," he said.

A surgeon-turned-politician, Ko is known for his colourful personal style.

Last year, he made a rap video for his mayoral re-election campaign called Do The Right Thing, which quickly went viral.

Ko has sought his own path between Taiwan's two main parties, Tsai's pro-independence Democratic Progressive Party and the China-friendly Kuomintang.

Visiting the US earlier this year, Ko told the conservative Heritage Foundation that Taiwan can be close to the US, but also friendly with China.

In July, Ko also went to Shanghai to meet the city's mayor, Ying Yong. While there, he reiterated previous comments that the two sides of the Taiwan Strait "are one family".

Ko said he had no plans so far to go to China next year.

Senior Chinese leaders are always on their guard in such meetings, as if you make a mistake in China, "you will disappear from the world", he added, with a laugh.

"They were very, very nervous when they talked with me."

"Because I'm very unpredictable. We're very easy. We say what we think. They can't. They're very rigid."