BEIJING (REUTERS) - China will expel former Interpol chief Meng Hongwei from a high profile though largely ceremonial advisory body to Parliament, state media reported, after the Chinese government put him under investigation for bribery and other violations.

Under President Xi Jinping, China has been engaged in a sweeping crackdown on official corruption.

Earlier this month, Interpol, the France-based global police coordination body, said that Meng had resigned as its president, after the French authorities said the Chinese official had been reported missing by his wife after travelling to his home country.

It is unclear where Meng is being held and it has not been possible to reach him for comment. It is also unclear if he has been allowed to retain legal representation.

In the latest move by the Chinese government against Meng, the Chinese People's Political Consultative Conference, which advises Parliament though it has no legislative powers, has decided to dismiss him from the body, state media said late on Friday (Oct 26).

The decision still needs formal approval from the body's standing committee, the official Xinhua news agency said, though this will only be a formality.

Meng had been a member of the body's foreign affairs committee. 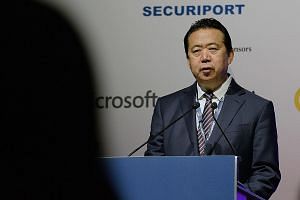 China's arrest of Interpol chief hindrance to its global ambitions

Members of the advisory body do not enjoy immunity from prosecution, unlike members of China's largely rubber-stamp Parliament.

Meng, 64 and a deputy minister of public security, became president of the global police cooperation agency in late 2016 amid a broader effort by China to secure leadership posts in international organisations.

His appointment prompted concern at the time from rights groups that Beijing might try to leverage his position to pursue dissidents abroad.