BEIJING (CHINA DAILY/ASIA NEWS NETWORK) - China's top anti-graft watchdog will step up supervision efforts this year in larger departments and industries with more funding and resources, according to an official communique.

It will also resolutely prevent officials from being enlisted and corrupted by interest groups, it said.

The communique was published after the third plenary session of the 19th Communist Party of China (CPC) Central Commission for Discipline Inspection (CCDI) was concluded in Beijing on Sunday (Jan 13).

More importantly, the commission will focus its anti-graft efforts in areas that concern the public the most, such as education, healthcare, environmental protection and food and drug safety.

Corrupt officials at the grassroots level will also be targeted, especially those who offer protection for mafia-like gangs and act like village tyrants, the communique said.

"China has had great achievements in fighting corruption, which has played an important role in economic development and social stability," said Mr Qi Zhenhong, director of the China Institute of International Studies. 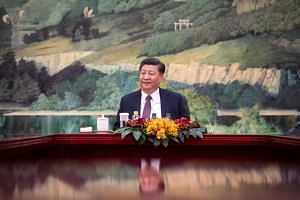 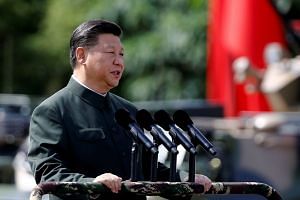 Anti-corruption efforts in financial fields should be stepped up, particularly in key projects, areas, and positions that concern the country's overall development and security, President Xi Jinping, general secretary of the CPC Central Committee, said last Friday (Jan 11) during the three-day plenary session.

Since the 18th CPC National Congress in 2012, party officials, especially high-ranking officials, have received clear requirements on intra-party activities as part of the all-out effort to enforce strict party discipline. This year, the party vows to firmly fight against formality for formality's sake and bureaucratism. Those who make vague statements, act perfunctorily and are slack at work will be punished, the communique said.

The sweeping victory secured so far in the anti-graft campaign must be further consolidated this year so that officials do not dare to, are unable to and have no desire to commit acts of corruption, it said. The nation and party's oversight system will also be further improved, the communique added.

Around 621,000 people were punished for corruption last year, including 51 officials at or above the provincial or ministerial level, according to the CCDI and the National Supervisory Commission, which was set up in 2018 as a part of efforts to reform the State supervisory system.