BEIJING (REUTERS)- Whether President-elect Donald Trump goes through with a deployment of a United States anti-missile system in South Korea will be a key indicator to how political ties unfold with China, sources with ties to the leadership in Beijing said.

Beijing will also be keeping a close eye on Trump's meeting on Thursday (Nov 17) with Prime Minister Shinzo Abe of Japan, its key regional rival, for clues on how the President-elect, who has never held public office, is likely to conduct foreign policy, they said.

South Korea and the United States have agreed to deploy a Terminal High Altitude Area Defence (THAAD) anti-missile system to counter missile threats from North Korea. It is expected to be in place within eight to 10 months, the commander of US forces in South Korea said earlier this month.

"Whether deployment of the Terminal High Altitude Area Defense is delayed is a political weather vane," one source said.

A security adviser to Trump said last week his meeting in New York with Abe on Thursday may mark the start of talks to garner Tokyo's support for a push-back against China's growing influence in Asia.

"We have heard what he said. We will now watch what he does," said the source, requesting anonymity because he is not authorised to speak to media. "We will play it by ear," the source said, invoking an idiom that translates to blocking a punch or a kick as it comes.

Trump has created doubts over his commitment to security alliances with Japan and South Korea, suggesting they need to pay more for a US military presence and even hinting they should develop their own nuclear weapons capability.

Japan going nuclear would be China's worst nightmare and is likely to provoke strong reaction, diplomats and analysts have said.

China's relations with Japan have long been poisoned by what Beijing sees as Tokyo's failure to fully atone for its invasion and occupation of parts of China before and during World War Two as well as competing claims over a group of East China Sea islets.

"North-east Asia would be a powder keg," a second source said, referring to a nuclearised sub-region including China, Japan, North and South Korea.

The State Council Information Office, or cabinet spokesman's office, had no immediate comment.

China is generally opposed to military alliances, seeing them as Cold War relics.

China's stability-obsessed leaders do not know what to make of the 70-year-old Trump, whose win over Hillary Clinton was unexpected, and has backpedaled on some of his more controversial campaign statements.

Trump had said during the election campaign he would be willing to withdraw the 28,500 US troops stationed in South Korea unless Seoul paid a greater share of the cost of the US deployment. 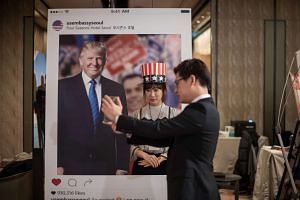 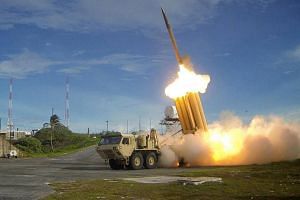 US to deploy missile system in South Korea in 8 to 10 months despite China, Russia objection

Trump told Reuters in an interview in May he was willing to talk to North Korean leader Kim Jong Un to try to stop Pyongyang's nuclear programme - a major shift in US policy toward the isolated nation - but has also called for China to do more to rein in Pyongyang.

Sino-US relations after Trump takes office on Jan 20 are expected to be fluid, although Chinese President Xi Jinping told Trump during a telephone call on Monday cooperation was the"only correct choice" for the two giants.

A statement from Trump's presidential transition office said the two men "established a clear sense of mutual respect for one another" and he believes the two countries will have one of the strongest relationships moving forward.

Trump's election does offer some good news for China: it signals the demise of the US-led Trans-Pacific Partnership (TPP), which excludes China; it raises the possibility of a belated US backing for the China-led Asian Infrastructure Investment Bank, and possibly marks an end to President Obama's strategic "pivot" to Asia.

The bad news is that Trump has often made provocative remarks about China during his campaign, including threats to slap 45 per cent tariffs on imports from China and label the world's second-biggest economy a currency manipulator.

Wei Jianguo, a retired vice commerce minister, was optimistic a trade war could be avoided.

"Protectionism is on the rise, but a trade war between China and the United States is unlikely," Wei, vice chairman of the China Center for International Economic Exchanges, a government-backed think-tank, told Reuters. "That was just election rhetoric," he said.