BEIJING (Reuters) - China said on Wednesday (June 8) the Philippines has ignored a proposal for a regular talks mechanism over maritime issues, as it repeated that its door was always open to bilateral talks with Manila on the South China Sea.

In a statement released in both Chinese and English, China's Foreign Ministry said the two countries had agreed in 1995 to settle disputes in the South China Sea "in a peaceful and friendly manner through consultations on the basis of equity and mutual respect".

China and the Philippines have held many rounds of talks on the proper management of maritime disputes, though have had no negotiations designed to settle the actual disputes in the South China Sea, the ministry said.

"China has on a number of occasions proposed with the Philippines the establishment of a China-Philippines regular consultation mechanism on maritime issues; however, to date, there has never been any response from the Philippine side." 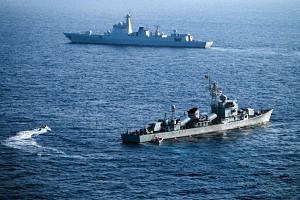 China claims most of the waters, through which US$5 trillion (S$6.8 trillion) in ship-borne trade passes every year. The Philippines, Vietnam, Malaysia, Taiwan and Brunei have overlapping claims, as well as close military ties with the United States.

The Philippines has brought a case at an international tribunal in The Hague contesting China's claims, a case rejected by China which wants to solve the issue bilaterally.

A Philippine ministry official familiar with the arbitration case said that as Manila is expecting the tribunal to hand down a ruling this month it would rather remain quiet until then.

A former Philippine foreign minister and a US security expert said on Tuesday Philippine President-elect Rodrigo Duterte should not hold unconditional bilateral talks with China to try to resolve their South China Sea dispute.

Duterte has said he would not go to war against China and may hold bilateral talks.

China's ministry repeated that it would not accept any dispute settlement being imposed on it, but the door of China-Philippines bilateral negotiations was always open.

"China urges the Philippines to immediately cease its wrongful conduct of pushing forward the arbitral proceedings, and return to the right path of settling the relevant disputes in the South China Sea through bilateral negotiation with China," it said.

The Philippines is contesting China's claim to an area shown on its maps as a nine-dash line stretching deep into the maritime heart of South-east Asia, covering hundreds of disputed islands and reefs.

China told the United States on Tuesday it should play a constructive role in safeguarding peace in the South China Sea, as US Secretary of State John Kerry called for talks and a peaceful resolution.