BEIJING (REUTERS) - China denounced the United States on Thursday (Dec 20) for passing a new law on restive Tibet, saying it was "resolutely opposed" to the US legislation on what China considers an internal affair, and it risked causing "serious harm" to their relations.

US President Donald Trump on Wednesday signed into law the Reciprocal Access to Tibet Act.

Beijing sent troops into remote, mountainous Tibet in 1950 in what it officially terms a peaceful liberation and has ruled there with an iron fist ever since.

"If the United States implements this law, it will cause serious harm to China-US relations and to the cooperation in important areas between the two countries," Hua said.

The United States should be fully aware of the high sensitivity of the Tibet issue and should stop its interference, otherwise the United States would have to accept responsibility for the consequences, she added, without elaborating. 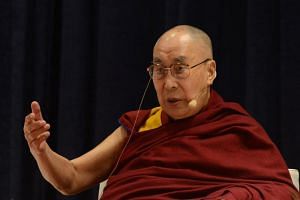 US moves to ban Chinese officials unless Tibet opens

All foreigners need special permission to enter Tibet, which is generally granted to tourists, who are allowed to go on often tightly monitored tours, but very infrequently to foreign diplomats and journalists.

Hua said Tibet was open to foreign visitors, as shown by the 40,000 American visitors to the region since 2015.

At the same time, she said it was "absolutely necessary and understandable" that the government administered controls on the entry of foreigners given "local geographic and climate reasons".

Tibetan rights groups have welcomed the US legislation.

The International Campaign for Tibet said the "impactful and innovative" law marked a "new era of American support" and was a challenge to China's policies in Tibet.

"The US let Beijing know that its officials will face real consequences for discriminating against Americans and Tibetans and has blazed a path for other countries to follow," the group's president, Matteo Mecacci, said in a statement.

Next year marks the sensitive 60th anniversary of the flight into exile in India of the Dalai Lama, the highest figure in Tibetan Buddhism, after a failed uprising against Chinese rule.

China routinely denounces him as a dangerous separatist, although the Dalai Lama says he merely wants genuine autonomy for his homeland.