Central government offices in Hong Kong represent the state, and their dignity and safety shall not be challenged, Ms Xu Luying, spokesman for the central government's Hong Kong and Macao Affairs Office (HKMAO), told a news briefing.

He also said the unrest reflects some deep-rooted problems in Hong Kong, which demand high attention and require effective measures to tackle.

Meanwhile, Ms Xu added that Hong Kong’s status as a Chinese territory is not up for discussion and Beijing will not sit idly by if the situation there endangers national security.

She told reporters the central government is confident that Hong Kong’s government has the will and ability to end the violence as soon as possible.

Though still grim and complex, the situation in Hong Kong is taking a positive turn, Mr Yang said. Ending violence and chaos and restoring order has become the broadest consensus and the strongest call of people from all walks of life in Hong Kong, he added.

The comments came after Reuters reported on an audio recording of Mrs Lam saying she wanted to quit over three months of unrest in the semi-autonomous city.

In response to the leaked recording, Mrs Lam said on Tuesday she has never asked the Chinese government to let her resign to end the city’s political crisis.

Hundreds of thousands of people have taken to the streets since mid-June in protests against a now-suspended extradition Bill that could see people sent to mainland China for trial in Communist Party-controlled courts. 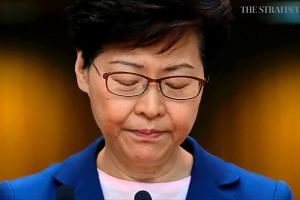 Mrs Lam told business leaders last week that she had caused “unforgivable havoc” by introducing the extradition Bill and that if she had a choice then she would apologise and resign, according to the audio recording.

Mrs Lam, a lightning rod for protesters’ anger, told a televised news conference on Tuesday that she had never considered asking to resign and that Beijing believed her government could solve the three-month long crisis without mainland China’s intervention.

“I have not even contemplated discussing a resignation with the central people’s government. The choice of resigning, it’s my own choice,” Mrs Lam said.

The growing unrest has evolved into a broader call for Chinese-ruled Hong Kong to be granted greater autonomy by Beijing, which has accused foreign powers, particularly the United States and Britain, of fomenting the unrest.