BEIJING (BLOOMBERG) - China is planning to scrap all limits on the number of children a family can have, according to people familiar with the matter, in what would be a historic end to a policy that spurred countless human-rights abuses and left the world's second-largest economy short of workers.

The State Council, China's Cabinet, has commissioned research on the repercussions of ending the country's roughly four-decade-old policy and intends to enact the change nationwide, said the people, who asked not named while discussing government deliberations.

The leadership wants to reduce the pace of ageing in China's population and remove a source of international criticism, one of the people said.

Proposals under discussion would replace the population-control policy with one called "independent fertility," allowing people to decide how many children to have, the person said. The decision could be made as soon as the fourth quarter, the second person said, adding that the announcement might also be pushed into 2019.

“It’s late for China to remove birth limits even within this year but it’s better than never,” said Chen Jian, a former division chief at the National Family Planning Commission, who’s now a vice president of the China Society of Economic Reform.

“Scrapping birth limits will have little effect on the tendency of China’s declining births.

Danone, which has doubled its share of China's baby food market in the past five years, rose to a session high in Paris before paring gains. Reckitt Benckiser shares erased declines in London.

The policy change would close the book on one of the largest social experiments in human history, which left the world's most-populous country with a rapidly ageing population and 30 million more men than women.

The policies have forced generations of Chinese parents to pay fines, submit to abortions or raise children in the shadows. 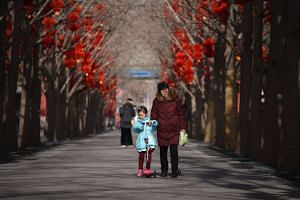 The US and other Western nations have criticised the coercive measures required to enforce the birth limits, including steep fines, sterilisation and forced abortions. The 2015 shift towards a two-child policy was part of a gradual effort to loosen the birth limits over the years as China's working-age population began to wane.

An initial feasibility study was submitted to Chinese Premier Li Keqiang in April, according to one of the people familiar with the discussions. That study found there would be "limited" benefits to lifting birth restrictions nationwide.

Li requested more research on the social impact of scrapping the policy altogether, the person said.

Neither the State Council Information Office nor the National Health Commission immediately returned faxed requests for comment Monday (May 21).

The move underscores growing concern among Chinese policy makers that more dramatic action is needed three years after allowing all families to have two children instead of one. Births fell 3.5 per cent to 17.2 million nationwide last year, according to the Bureau of National Statistics, erasing almost half of the increase in births caused by relaxing the policy.

China's greying society will have broad consequences for the nation and the world, weighing on President Xi Jinping's effort to develop the economy, driving up pension and healthcare costs, and sending foreign companies further afield for labour.

The State Council last year projected that about a quarter of China's population will be 60 or older by 2030, up from 13 per cent in 2010.

"The low birth rate and low number of newborns from the previous two years after the two-child policy sent a strong message to the decision-makers that the young generation has a weak willingness to have more children," said Chen Jian, a former division chief at the National Family Planning Commission, who's now a vice president of the China Society of Economic Reform.

"China's population issues will be a major hurdle for President Xi Jinping's vision of building a modernised country by 2035."

In March, China removed the term "family planning" from the name of the newly consolidated National Health Commission - the first time since 1981 that no agency bears the name.

Xi and Li also omitted any reference to the phrase from key policy reports in recent months.

While China credits birth limits with helping to launch a decades-long economic boom under reformer Deng Xiaoping, they have also exacerbated demographic imbalances, with many parents choosing to abort female fetuses.

China has 106 men for every 100 women, compared with 102 globally, according to the CIA World Factbook.

Such moves have done little to increase the fertility rate, with many parents concerned about the costs of raising additional children in a society accustomed to focusing family resources on one.

Nonetheless, Chinese policy makers have resisted calls by economists and demographers to relinquish control amid concerns over the impact of a sudden increase in births or older parents angry about missing the chance to expand their families.

Even a short-lived baby boom could prove lucrative for businesses who cater to childrens' needs in the world's most populous county. Chinese consumers bought US$19.4 billion of infant products between September 2016 and August 2017, an 11 per cent increase, according to an annual report released by Nielsen Holdings Plc in November.