BEIJING (AFP) - China is ramping up a global campaign to promote its own vision of human rights, inviting the likes of North Korea and Syria to a forum on the topic and drafting other countries to back its policies at the United Nations.

Western nations have condemned China's rights record, including a security crackdown that has detained an estimated one million mostly Muslim minorities in re-education camps in the north-west Xinjiang region.

China is responding with an increasingly strong counter-narrative, which emphasises security and economic development over civil and political freedoms.

"The people of each country all have the right to decide for themselves their human rights development path," Chinese vice-foreign minister Ma Zhaoxu told delegates at a summit on the issue this week.

One of the speakers at the forum was a political adviser to Syrian President Bashar al-Assad, who has been accused of a series of chemical attacks and indiscriminate bombings of civilian targets in Syria's civil war.

"I believe China can, with the help of all developing countries, redefine human rights," Mr Bouthaina Shaaban said in a speech that blasted Western countries for wanting to "create all of us in their own image".

Mr Shaaban's comments echoed China's fiery responses to allegations of human rights abuses, which it says are used to undermine the country's sovereignty.

China's response to a recent barrage of international condemnation over its mass detention of ethnic Uighurs in Xinjiang shows its efforts to frame development and security as the most important human rights.

After initially denying the existence of detention camps, Beijing acknowledged it had opened "vocational education centres" aimed at preventing extremism after years of unrest in the region. 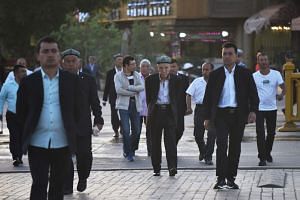 The US Uighur Act and China's Xinjiang region explained

It followed the leak of official documents describing how authorities run the internment camps and the US House of Representatives passing the Uighur Act of 2019 to target Chinese officials with sanctions.

The footage includes graphic images of a car ramming into a crowd at Beijing's Tiananmen Square in 2013 and a mass knife attack at a train station in Kunming in south-west China that left 31 dead in 2014.

"The most fundamental human right is the right to a safe life, and only by ensuring people's safety can human rights be protected," the official Xinhua news agency said in a commentary last week.

The documentaries reinforce the narrative that "Uighurs are discontented because they don't have the proper economic opportunities", Hong Kong-based political analyst Willy Lam told AFP.

"The main purpose (of the crackdown) is suppression of the political aspirations of the Uighurs, but they are trying to put an economic spin on this," he added.

A September white paper by the government called poverty "the biggest obstacle to fulfilling the human rights of the Chinese people", and emphasised that China had lifted hundreds of millions of people out of absolute poverty since the 1970s.

China's efforts to redefine human rights have been gaining momentum in international forums.

But China's allies countered with a statement of their own that won even broader support, with some 54 nations backing a text that heaped effusive praise on Beijing's "remarkable achievements in the field of human rights".