BEIJING (NYTIMES) - China has too many factories making too many goods. Thanks to its punishing trade war with the United States, its biggest overseas customer isn't buying like before.

So China is seeking new customers. They could prove to be a hard sell.

China this week formally restarted its efforts to create a free-trade zone across the Asia-Pacific region, with an unlikely goal of striking a deal by November. If successful, the pact could eventually open markets from Australia to India.

Beijing is also trying to keep alive long-shot, three-way talks that would lower trade barriers among China, Japan and South Korea. More broadly, it is unilaterally reducing its own tariffs on a broad range of goods from all over the world, even as it puts higher retaliatory tariffs on American-made goods.

At stake is the health of the Chinese economy. Last week, China reported that its growth slowed to its most sluggish pace in nearly three decades, in part because the trade war with the Trump administration has begun to hit its crucial export sector.

Global companies are now looking to shift work to other countries to avoid what could be a protracted trade war.

With no end in immediate sight, China needs new markets for what it makes.

"It's hard to replace the US, but you have to try, you have to diversify," said Professor Chen Dingding an international relations expert at Jinan University in Guangzhou, China. "We don't want to rely on the US market forever, even though it's important."

But trade pacts are difficult to strike and China's potential free-trade partners have plenty of reasons to be worried. 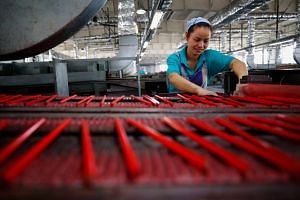 China shrugs off impact of US tariffs on its economy

China slowdown's orderly, no alarm yet

No country can absorb the sheer volume of what China sells to US customers. China's regional neighbours compete against it in a number of industries. And China continues to maintain high tariffs and other barriers to protect its own industries - barriers that would have to drop if other countries were to sign on.

The economic clash between the US and China has thrown the world trade system out of balance. China runs an annual surplus in manufactured goods trade of almost US$1 trillion (S$1.37 trillion), meaning that is how much more it sells to the world than it buys each year. Nearly half of that surplus comes from trade with the US.

China's overall exports to the US slumped 8.5 per cent in the first half of this year. China's exports to the rest of the world have risen only 2.1 per cent. As Beijing's trade war with Washington drags into its second year, the question now is who might buy China's extra factory goods if the US does not.

Already, the country is plagued with excess capacity for making cars, steel and other staples of global trade. More factory slowdowns and shutdown could lead to job losses and further drag down economic growth.

Faced with further potential economic pain, Beijing is looking to open up other markets. The centrepiece of its efforts is a push this summer to negotiate an Asian free trade pact called the Regional Comprehensive Economic Partnership, or RCEP. The partnership would encompass the 10 countries of the Association of Southeast Asian Nations (Asean) plus Australia, China, India, Japan, New Zealand and South Korea.

Mid-level and senior trade officials from across the region began meeting this week in Zhengzhou, China. Their ministers are then scheduled to join them in Beijing on Aug 2 and 3. The goal is to outline a deal that Asian leaders might then work out at a summit meeting in Bangkok in November.

"We are continuing talking on this, and we hope we can accelerate the speed so that it can be concluded within this year," said Mr Wu Jianghao, director-general of the department of Asian affairs at the Chinese Foreign Ministry.

China's leaders have talked since 2012 about the possibility of such a regional partnership, in response to former President Barack Obama's plans for a multination trade deal called the Trans-Pacific Partnership that would have excluded China. Working out a deal would require solving some thorny issues.

"I'm not optimistic about that deal to be materialised in November," said Mr Takeshi Niinami, chief executive of Suntory, the Japanese beverage company, and a member of a council that advises Japan's Prime Minister Shinzo Abe on economic issues. "Maybe we need more time," he said.

One obstacle had been China's own high tariffs. Beijing long feared that if it cut tariffs, manufacturers would flee China's surging wages and find lower-cost refuges in countries like Vietnam and Bangladesh. 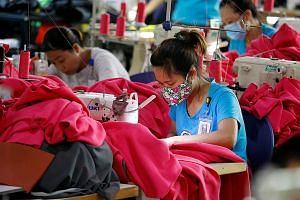 Why US factories won't leave Asia

Starting in May of last year, China began reducing its tariffs. Trade tensions with the US were rising. Chinese leaders had also become increasingly willing to lower protective walls around the country's labour-intensive, low-tech industries so as to focus on more sophisticated manufacturing.

Though average tariffs remain higher than those of the US and the European Union, the categories for which China has reduced tariffs include many low-tech manufactured goods, like handbags and low-cost garments, which many of China's neighbours would like to export.

"We will continue to lower overall tariffs voluntarily, remove non-tariff barriers, actively increase the import of goods and services, and enhance import facilitation," Premier Li Keqiang said in a speech July 2 in Dalian, China, at the "summer Davos" session of the World Economic Forum.

Winning support could be a tall order. India, for example, with its size and fast growth could be a potentially vast buyer of Chinese goods. But India protects its markets behind the highest average tariffs among the world's biggest economies, and it fears floods of low-priced imports from China.

Still, Indian pharmaceutical-makers want to ship more generic drugs to China. Service industries, like computer programming, want to make it easier for Indian programmers to get temporary work visas there.

Yet China has been wary of opening its doors to Indian pharmaceuticals and Indian workers. One possibility is that the negotiations could reach a deal that does not initially include India, said Ms Mari Pangestu, a former trade minister of Indonesia. But that would limit the benefits for the other countries in the talks.

Even if a deal is struck, it is not clear how much China might benefit. A number of potential members, like Japan and South Korea, are highly competitive manufacturers themselves and may not import a lot more.

Even if China strikes new trade pacts, it will still face pressure to find markets for the vast amounts of manufactured goods it makes, said Mr Brad Setser, a former Treasury official in the Obama administration who is now at the Council on Foreign Relations in New York.

"There's absolutely no other country in the world that is willing right now to replace the United States in running a close to US$400 billion annual trade deficit in manufactured goods with China," he said.