The Ministry of Emergency Management said in a notice late on Wednesday (March 27) that the authorities needed to "deeply absorb" the lessons of the explosion at the chemical park in the city of Yancheng in eastern China's Jiangsu province.

The blast a week ago occurred at a plant owned by the Tianjiayi Chemical Company, which produces more than 30 organic chemical compounds. State media said the company had a history of safety violations and had been punished repeatedly.

Rescue efforts at the blast site were officially completed on Monday. A total of 164 people were caught up in the explosion, with 86 survivors, the local government said.

In a new round of inspections, safety departments have been told to investigate "poor, chaotic and small" enterprises and to ensure that unqualified companies are shut down.

They are also under pressure to crack down on other violations, including the illegal or excess storage of dangerous chemical materials.

They have also been urged to make use of big data and other technological methods to strengthen real-time monitoring of hazardous chemical producers. 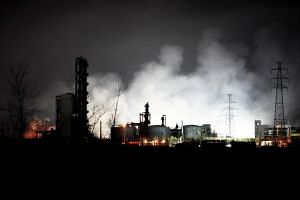 Environmental authorities have been at pains to show the incident was under control, and continue to seal off rivers in order to prevent water contaminated with toxic chemicals from posing health risks to residents.

The environmental protection bureau in the area said an emergency plan to remove and treat toxic wastewater from a river close to the blast site was under way, with surface water concentrations of dangerous chemicals such as benzene exceeding standards.

Environment Minister Li Ganjie also visited the site this week and urged workers to ensure that polluted wastewater does not overflow as a result of heavy rain. He also visited the nearby Tianwan Nuclear Power Plant and urged officials there to learn lessons from the accident, the ministry said on Thursday.

“In the next stage, we will tighten environmental impact assessment approvals for chemical plants and enhance daily inspections,” environment ministry spokesman Liu Youbin told Reuters on the sidelines of a briefing on Thursday.

China has a history of major work safety accidents and each one normally triggers a nationwide inspection campaign aimed at rooting out violations and punishing officials for cutting corners or shirking their supervisory duties.