HONG KONG (BLOOMBERG) - As trade tariffs and tweets by United States President Donald Trump hammer some of China's biggest companies, the country's movie business is taking a hit - from its own government.

Tougher government censorship has blocked potential hits and compelled filmmakers to stick with safe formulas that aren't winning audiences, while a tax evasion crackdown has made some investors reluctant to back films, crimping output even further.

In the year after Chinese President Xi Jinping put the Communist Party's propaganda office in charge of regulating films, China's box-office totals are headed for their first annual decline in at least a decade.

Further hurting the industry, potential summer hits that might have come to the rescue have been cancelled, with no explanation.

The chill has spread to some of China's most globally recognised filmmakers, bankable names that cinema operators have relied on for hits.

In February, director Zhang Yimou's One Second was withdrawn from the Berlin Film Festival and has since been subject to a series of government-ordered re-cuts, the Hollywood Reporter reported last month.

Three of Zhang's films were nominated for Academy Awards. He won top honours in Berlin for Red Sorghum and directed China box-office hits including Hero and House Of Flying Daggers.

Another prospective summer winner, Guan Hu's The Eight Hundred, was withdrawn before a planned July 5 premiere. The film was anticipated to be a crowd-pleaser and a critical success that could help restore momentum for local fare.

"The Eight Hundred was going to be a big film," said Mr TJ Green, chief executive officer of Apex International Cinemas, which builds and runs cinemas through a strategic alliance with the state-owned China Film Group. "It's definitely a disappointment and this summer's revenues have definitely been affected." 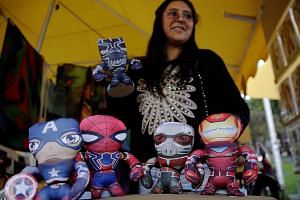 No earrings, tattoos or cleavage: Inside China's war on fun

Amid the dearth of hits, China's box-office sales fell 3.6 per cent in the first half of this year, led by declines for films debuting outside the February Chinese New Year and this year's May 1-4 Labour Day holiday, according to data from Maoyan Movie and Box Office Mojo.

With the US-China trade tensions in the backdrop, the department overseeing films in China is widening the window for overseas pictures as a way to help cinema owners fill seats.

China's cinema market is the world's second-largest and one of the most heavily regulated. Prime movie-going periods like big national holidays and summer are usually reserved for local fare. But when attendance dips, regulators tend to approve Hollywood blockbusters even in these periods to help cinema owners pull in viewers.

For instance, Fast & Furious Presents: Hobbs & Shaw, a spin-off of a Universal Pictures' car-chase franchise that has been a huge hit in China, has been approved for summer release, according to Mr Green.

"Usually it's a blackout for foreign films in summer, but they realised we need it," he said.

Every film must be cleared by the government to appear in China and an informal cap has been imposed of about 34 foreign films a year on a revenue-sharing basis. Studios have lobbied China to raise that number and to sweeten the revenue-sharing arrangement under which they take in about 25 per cent of box-office sales, significantly less than in North America and other markets.

At the same time, this makes foreign blockbusters especially attractive as a way to boost cinema revenue in China.

The summer-season approval for Hobbs & Shaw also suggests that the success of local blockbusters and comedies in 2017 and 2018 have failed to sustain a trend away from Hollywood fare to fill seats.

A Chinese science-fiction hit The Wandering Earth, is still 2019's best-selling film with about US$691 million (S$938 million), though it was followed closely by the Walt Disney co-owned Marvel's Avengers: Endgame at US$614 million, Box Office Mojo data show.

In the previous year, the top four films were all Chinese, led by action film Operation Red Sea and the comedy Detective Chinatown 2. A drop in Chinese film production over the past year was the biggest contributor to the box-office decline, said Ms Lindsay Conner, a partner at Manatt, Phelps & Phillips LLP's entertainment consultancy.

"This was largely due to the tax issues that faced a number of Chinese companies and talent over the past year, and financial limitations on production capacity that resulted," she said.

Chinese authorities cracked down on tax evasion last year, a sweep that led Fan Bingbing, one of China's best-known actors, to fall out of public view for months. She re-emerged with an apology published on social media and an agreement to repay more than US$100 million in tax and penalties.

The scandal, and the government's limits on pay for performers, spooked investors and slowed production at studios that had been spooling out films to meet demand that more than quintupled since 2010 to 56.6 billion yuan (S$11.18 billion) last year.

The decline erodes China's status as a growth engine for Hollywood movies as US film fans are increasingly watching online rather than at the cinema. That, and a dearth of hits this year, has led US studios to rely on China's box-office to pick up the slack even more.

Still, some industry insiders are optimistic.

Mr Green, for example, said he was looking to increase investment in building and operating cinemas in the country, adding that cinema acquisitions were of particular interest. In the long run, demand will drive growth, he said.

Dr Ying Zhu, author of Two Billion Eyes: The Story Of China Central Television and a professor at City University of New York, said China's cinema market will rebound, though tax-evasion scandals, censorship and trade tension with the US have created a "capital winter", winnowing investment.

Projections for China's ticket revenue to overtake the US as the world's largest next year are also fading, even though China has already surpassed the US in number of screens.

Censorship is not only leading to a decline in Chinese films that are approved, but it is also prompting filmmakers to rely heavily on formula-driven movies that may lack appeal, he said. The year will probably end flat or a "small percentage" down from 2018.