BEIJING (BLOOMBERG) - Pieces of an electric car hang from the ceiling of a Chinese real-estate developer's showroom, evoking an edgy installation at a modern art museum. In reality, they're a symbol of the nation's industrial ambitions.

Just down the neatly manicured road, about a dozen skyscrapers rise from the fields as Shunde New Energy Vehicle Town takes shape inside the southern city of Foshan, part of China's manufacturing heartland. Local officials boast that their planned hub for EV production and research eventually could generate 100 billion yuan (S$19.9 billion) in revenue for the hometown economy.

Shunde is one of at least 20 electric-centric versions of Detroit under construction as China goes all-in on a technology projected to sell in record numbers this year. President Xi Jinping wants the nation's 500 EV makers to be magnets for ancillary industries as he pushes to build a manufacturing superpower by 2025.

That blueprint, meant to make China more self-sufficient and diversify an investment landscape dominated by volatile property and equity markets, has become central to the United States-China trade war.

Municipalities needing ways to recalibrate their economies want a piece of that plan. They're offering cheap land, tax breaks and housing subsidies to carmakers, parts suppliers and engineering labs in hopes of attracting thousands of high-technology jobs in the burgeoning EV sector.

"The new-energy vehicle industry is a bet local governments must take," said Mr He Xiaopeng, chairman of Xpeng Motors Technology, a start-up backed by Alibaba Group Holding and Foxconn Technology Group. "A successful EV maker could bring at least 200 companies in the industry chain into a province."

The amount of investment committed to developing these EV towns is a staggering 209 billion yuan so far, according to Bloomberg calculations based on public announcements. The commitments range from fixed-asset investments to development costs by carmakers, private capital and local government-backed entities.

The other hubs include Geely Automobile Holdings' plan for a research and production base in Yiwu, LeEco Vehicle Ecological Town in Huzhou and Self-Driving Auto Town in Xiamen. 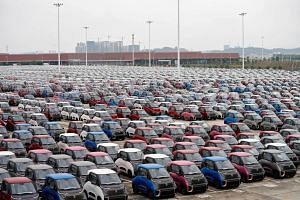 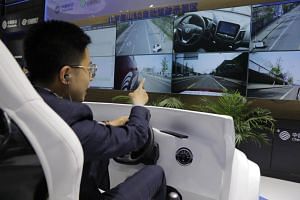 Coming soon to China: The car of the future

The towns emblematise the ripples that typify China's command-led economy. Enthusiasm at the top levels of government for a particular industry trickles down to the hinterlands, which often respond with experiments recalling the movie Field Of Dreams: build it and they will come. Localities erect industrial parks, apartment buildings and schools, lay out their incentives and then hope businesses take up their offers.

That's happening about an hour outside of Beijing, where the government is constructing a Fund Town that's meant to be a hub for the almost US$2 trillion (S$2.75 trillion) private funds market. More than a dozen towns designated as financial zones are scattered across the country.

Between 2009 and 2017, China spent about US$36.5 billion subsidising EV sales, according to the Centre for Strategic and International Studies in Washington. China now accounts for more than half of all passenger EV sales worldwide.

Shunde NEV Town is being constructed by Country Garden, China's largest developer. To win the plots, the company promises to bring EV-related businesses and to meet tax revenue targets.

"The industry chain is far more comprehensive than car manufacturing," said Mr Liu Wei, who's overseeing the project for Country Garden. "We're well aware the fever will fade, but some emerging firms will grow, and that's who we want to house."

Prices in what are officially referred to as "characteristic small towns" are an average of 49 per cent cheaper than in adjacent plots, according to a China Real Estate Information Corp study last year.

That helped Country Garden pare office rents by as much as 25 per cent from market rates. And those businesses need skilled workers, so the government offers subsidies of as much as six million yuan to help them buy a home.

"The towns have at least one key resource that EV makers and suppliers are eager to own: the land," said Mr Cui Dongshu, secretary general of the China Passenger Car Association. "That will naturally attract them to move into the towns."

Government support for EVs is common globally, Mr Zeng said. The US-subsidised purchases of EVs and the state of Nevada approved a US$1.3 billion incentive package for Tesla to build its battery gigafactory there.

Youxia, which has raised at least US$1.3 billion and is expected to launch its first model this year, didn't return requests for comment.

The town is planned as a 2 sq km area. Sketches show schools, hospitals, a subway line to the airport and a version of New York's The High Line.

Yet the EV towns are developing just as China's overall auto sales crater. And while sales of passenger EVs are projected by BloombergNEF to reach 1.6 million units this year, that's likely not enough to keep 500 companies' assembly lines humming.

EVs still only account for less than 5 per cent of total car sales in China, and the government is cutting subsidies to force makers to thrive on innovation instead of handouts.

Those factors have some analysts seeing flashing red lights ahead.

"Most of those EV towns will fail," said Mr John Zeng, managing director of LMC Automotive Shanghai. "This wave of electric-vehicle building will come to a life-or-death moment. When EV carmakers are being squeezed, the 'EV Town' bubble will burst."

A recent visit to Shunde found its voltage a bit low. No one in Country Garden's showroom could name the suspended car's make or model. And there were few gearheads around, with most offices seemingly empty on a weekday.

Still, Mr Liu is optimistic the sleepy district will one day morph into an electric Detroit.

"I admit that the EV sector is still working its own way," Mr Liu said. "But we have been well aware of sector challenge since planning it two years ago, and we're confident that we can adapt to the change."