Last Thursday, the US State Department imposed sanctions on China's Equipment Development Department (EDD), the branch of the military responsible for weapons procurement, for engaging in "significant transactions" with Rosoboronexport, a major Russian arms exporter.

The sanctions target the EDD and its director, Mr Li Shangfu, who are involved in China's purchase of Russia's SU-35 combat aircraft and the S-400 surface-to-air missile system, the US department said.

Sanction measures include denying US travel visas to EDD staff and banning them from using the US financial system or making foreign exchange transactions within US jurisdictions. They also block the entity's property and interests within US control, it added.

In response, China summoned US envoys last Saturday, including US ambassador to China Terry Branstad and the US acting defence attache David Menser, to strongly protest against the sanctions.

The MND said in an online statement that China will immediately recall Chinese navy commander Vice-Admiral Shen Jinlong, who is in the US attending the 23rd International Seapower Symposium.

In addition, China will postpone the second meeting of a communication mechanism for the joint staff departments of China and the US, scheduled for Tuesday to Thursday (Sept 25-27) in Beijing, the ministry added.

Military cooperation between China and Russia is a normal activity between sovereign states that goes in line with international law, Mr Huang Xueping, deputy head of the Central Military Commission Office for International Military Cooperation, said in the ministry's statement.

Mr Huang called the US sanctions "unreasonable", a "blatant violation of basic norms of international relations" and "a stark show of hegemony" that severely damage Sino-US military relations as well as bilateral ties.

"China resolutely opposes the US move and will never accept it," he said. "China demands the US side immediately correct its mistake and withdraw the sanctions, and the Chinese military reserves the right to take further countermeasures," Mr Huang warned.

Experts said the sanctions could pose uncertainty on Chinese Defence Minister Wei Fenghe's planned visit to the Pentagon later this year. The visit was meant to continue the constructive trend of frequent high-level military visits between the two countries, said Mr Cui Tiankai, Chinese ambassador to the US, on July 30. 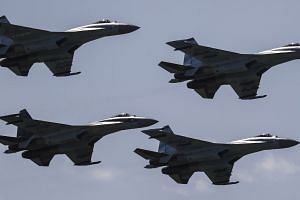 Experts also called the sanctions a "malicious move" that have not only escalated tensions and damaged the positive momentum of Sino-US military relations, but also left a dangerous impression that the US will confront China and Russia both on trade and military fronts.

Rear-Admiral Yang Yi, a professor at the PLA National Defence University, said the US sanctions will have little effect on China's actual military procurement process.

"But it is very damaging to Sino-US military relations because the sanctions are blatant and malicious attempts by the US to sabotage the modernisation process of the PLA," he said.

"The sanctions also try to make an example out of China and bully other countries to refrain from buying military equipment from Russia."

Russia is the world's second largest weapons seller after the US, and has deals with US allies such as Morocco, Algeria, Egypt, Qatar and Turkey, according to CNN.

Kremlin spokesman Dmitry Peskov told reporters last Friday that Russia views the new set of sanctions as an attempt to undermine the competitiveness of Russian arms exports, and vowed to reciprocate.

Dr Fan Jishe, a researcher of US studies at the Chinese Academy of Social Sciences, said the US is "shaming and insulting" China by putting EDD and its director in the crosshairs of the new sanctions over the three-day Mid-Autumn Festival holiday, which ends on Monday.

"It is very disheartening to see the US government taking a confrontational approach to issues that could have been resolved diplomatically," he said.