Mr Li Zhanshu, a member of the Standing Committee of the Political Bureau of the Communist Party of China, gave the letter to Mr Kim in a meeting with him on Sunday (Sept 9) when he attended a military parade to celebrate the 70th anniversary of North Korea's founding, according to China Central Television, Yonhap news agency reported.

Mr Li had travelled to North Korea as a special envoy of President Xi.

In the letter, President Xi hailed Mr Kim's "focused efforts to develop the economy and improve people's livelihood" through his "new strategic line."

"China and North Korea, through the three past summits with Kim, opened a new chapter in the development of bilateral relations," Mr Xi said in the letter. "(I) want to develop North Korea-China relations more quickly by implementing the two sides' common understanding."

According to Xinhua news agency, Mr Li said that no matter how the international and regional situation changes, China's firm commitment to the consolidation and development of bilateral ties will not change. 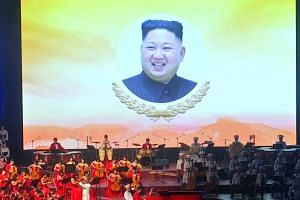 North Korea celebrates 70th birthday with parade, but does not show off intercontinental ballistic missiles 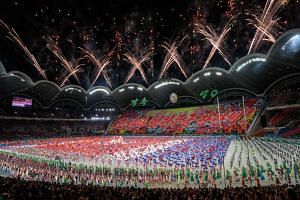 Mr Li also said his visit aims to implement the important consensus between Mr Xi and Mr Kim, enhance high-level strategic communication, carry out friendly exchanges in various fields and have in-depth exchanges of views on further development of the traditional friendship so as to create a better future for the China-North Korea ties, Xinhua reported.

In the meeting with Mr Kim, Mr Li also reiterated China's commitment to a nuclear-free Korean Peninsula, according to the report, reported Yonhap.

"(China) hopes North Korea and the United States will implement their common understanding (made) in their bilateral summit and keep to the good trend of peace and dialogue," the Chinese official said, adding that China wants to play a "constructive role" in resolving Korean Peninsula issues politically together with other concerned nations.

Mr Kim reciprocated with an expression of appreciation, saying, "Currently North Korea is following a strategic line of focusing on economic development."

He also said the North wants to learn from China's experience of economic development and expand their bilateral relations, Yonhap reported.

Mr Kim also referred to the June summit meeting with US President Donald Trump in Singapore, noting that he wants the US side to take action in proportion to North Korean efforts taken in accordance with their agreement in the summit.

The news of the North Korea-China exchange came after North Korea's dramatic gesture of good will as they celebrated the national anniversary ceremony with a toned-down military parade.

Mr Kim did not deliver his usual speech at the celebratory military parade, which, in turn, did away with its usual display of menacing intercontinental ballistic missiles, apparently as the country attempted not to provoke the United States or South Korea as the countries engage in dialogue efforts to end animosity on the Korean Peninsula.