After his US counterpart Donald Trump escalated trade tensions by threatening to impose tariffs on every Chinese export to the US, Xi appears to be digging in for a protracted conflict, betting that his ability to weather the impact of tariffs is higher.

Targeted measures from tax breaks to monetary tweaks announced in recent days may be just the beginning: Xi has massive additional firepower at his disposal should he need it.

There's huge scope for cuts to the bank reserve ratio while benchmark interest rates haven't been reduced since 2015. Policy makers could also loosen fiscal purse strings or further ease banks' capital requirements, as they already did on Wednesday (July 25).

While economists don't yet foresee any major growth impact from either tariffs or the ongoing campaign to rein in debt, their confidence may in part be based on Xi's apparent willingness to tweak policy when threats appear.

"China's economy is among the best placed in the world to offset a potential drag from trade tensions, being a large, relatively closed economy with plenty of policy ammunition at the ready to defend against a hit to growth."

Should yet further ammunition be needed, Xi could ultimately turn to quantitative easing, depreciate or devalue the yuan to bolster export competitiveness or even begin selling his nation's massive hoard of US Treasuries. However, there's no suggestion those could be realistic policy options any time soon.

The measures deployed so far are modest and targeted as Xi strives to maintain his signature campaign to ensure debt is curbed and financial risks reduced.

The policy shifts nonetheless underscore his readiness to deploy further stimulus options if they are needed to put a floor under decelerating growth. Expansion slowed to 6.7 percent in the second quarter from 6.8 percent in the previous three months.

Because of the determination to rein in leverage, policy makers are also now turning to fiscal spending as well as monetary easing. Monday's State Council statement said fiscal policy should be "more proactive" and better coordinated with financial policy.

Should Trump slap tariffs on more than US$200 billion of Chinese exports, Xing says China has room to widen the deficit from a target of 2.6 percent of GDP for the year to 3 percent or slightly more to cut taxes for firms in the most-affected sectors.

A shift to a higher deficit target can be formalized now if given the greenlight by the legislature, said Zhu Qibing, chief macroeconomy analyst at BOC International China Ltd. in Beijing.

China has more than 2.3 trillion yuan (S$462 billion) in fiscal firepower to deploy in the second half, according to Bloomberg calculations using data from the Finance Ministry and the ChinaBond website run by China Central Depository & Clearing Co.

Additionally, tax cuts on personal income that may boost consumption are under consideration, as are additional projects to boost investment in transport, oil, gas, and telecommunications. The resumption of public-private-partnership projects may also help leverage private investment.

Selling Treasury bills or a yuan devaluation would be last-resort measures, though the government has said it wouldn't do either. 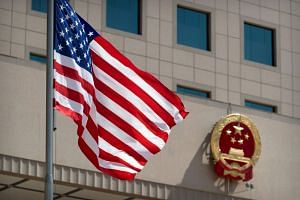 Averting a US-China trade war difficult because of deep differences between the two economies: Trade experts

Trump charges that China's already using its currency as a trade-war weapon, saying that it's "manipulating" the yuan and it's been "dropping like a rock," after it fell to its lowest level in more than a year against the dollar this month.

By helping China's export competitiveness, the yuan slump should in fact boost the country's gross domestic product by 40 to 50 basis points, which is enough to blunt the impact of US levies on US$250 billion of Chinese goods, Goldman Sachs Group Inc. economists led by MK Tang wrote in a note dated July 25.

"Only then will it consider reducing benchmark lending and saving rates if the trade war leads to economic turmoil. The standard QE would be a last resort. At the moment, it is neither probable nor necessary."