GUANGZHOU (NEW YORK TIMES) - One person was turned away by hotel after hotel after he showed his identity card.

Another was expelled by fearful local villagers.

A third found his most sensitive personal information leaked online after registering with the authorities.

These outcasts are from Wuhan, the capital of Hubei province, where a rapidly spreading viral outbreak has killed more than 420 people in China and sent fear rippling around the world.

They are pariahs in China, among the millions unable to go home and feared as potential carriers of the mysterious coronavirus.

All across the country, despite China's vast surveillance network with its facial recognition systems and high-end cameras that is increasingly used to track its 1.4 billion people, the government has turned to familiar authoritarian techniques - like setting up dragnets and asking neighbours to inform on one another - as it tries to contain the outbreak.

It took the authorities about five days to contact Mr Harmo Tang, a college student studying in Wuhan, after he returned to his hometown, Linhai, in eastern Zhejiang province.

Mr Tang said he had already been under self-imposed isolation when local officials asked for his personal information, including name, address, phone number, identity card number and the date he returned from Wuhan.

Within days, the information began to spread online, along with a list of others who returned to Linhai from Wuhan.

Local officials offered no explanation but returned a few days later to fasten police tape to his door and hang a sign that warned neighbours that a Wuhan returnee lived there.

The sign included an informant hotline to call if anyone saw him or his family leave the apartment.

Have a good cry but no boozing: Expert tips for coronavirus-stressed China

"In reality, there's not much empathy," he said. "It's not a caring tone they're using. It's a warning tone. I don't feel very comfortable about it."

Of course, China has a major incentive to track down potential carriers of the disease. The coronavirus outbreak has put parts of the country under lockdown, brought the world's second-largest economy to a virtual standstill and erected walls between China and the rest of the world.

Still, even some government officials called for understanding as concerns about prejudice spread.

Experts warned that such marginalisation of an already vulnerable group could prove counterproductive, further damaging public trust and sending those who should be screened and monitored deeper underground.

"We are paying attention to this issue," Mr Ma Guoqiang, the Chinese Communist Party secretary of Wuhan, said at a news conference there last Tuesday (Jan 28).

"I believe that some people may label Hubei people or report them, but I also think most people will treat Hubei people with a good heart."

While networks of volunteers and Christian groups have been vocal about offering help, many local leaders have focused efforts on finding and isolating people from Hubei.

On big screens and billboards, propaganda videos and posters warn people to stay inside, wear masks and wash hands.

In the northern province of Hebei, one county offered bounties of 1,000 yuan (S$196) for each Wuhan person reported by residents.

How Wuhan lost the fight to contain the coronavirus

Coronavirus: Communities in China hunt for travellers from Wuhan

In the eastern province of Jiangsu, quarantine turned to imprisonment after the authorities used metal poles to barricade shut the door of a family recently returned from Wuhan.

To get food, the family relied on neighbours who lowered provisions with a rope down to their back balcony, according to a local news report.

Scared for the safety of his children as conditions at home worsened, Mr Andy Li, a tech worker from Wuhan travelling with his family in Beijing, rented a car and began driving south to Guangdong, an effort to find refuge with relatives there.

In Nanjing, he was turned away from one hotel before getting a room at a luxury hotel.

There he set up a self-imposed family quarantine for four days, until the local authorities ordered all people from Wuhan to move to a hotel next to the city's central rail station.

Mr Li said the quarantine hotel did not seem to be doing a good job in isolating people. Food delivery workers came and went, while gaps in the doors and walls allowed drafts in.

"They're only working to separate Wuhan people from Nanjing people," Mr Li said. "They don't care at all if Wuhan people infect each other."

To help, he stuffed towels and tissues under the door to block the drafts. "I'm not complaining about the government," Mr Li said. "There will always be loopholes in policy. But in a selfish way, I'm just really worried about my children."

Across the country, the response from local authorities often resembles the mass mobilisations of the Mao era rather than the technocratic, data-driven wizardry depicted in propaganda about China's emerging surveillance state.

They have also turned to techniques Beijing used to fight the outbreak of Sars, another deadly disease, in 2002 and 2003, when China was much less technologically sophisticated.

Checkpoints to screen people for fevers have popped up at tollbooths, at the front gates of apartment complexes and in hotels, grocery stores and train stations.

Online, jetsetting and monitoring: How life in China has changed since Sars

Such checks were worthless, for instance, against one man in the western province of Qinghai, whom police are investigating on suspicion that he covered up his symptoms to travel.

Authorities have used computerised systems that track ID cards - which must be used to take most long-distance transport and stay in hotels - to round up people from Wuhan.

Yet one article about the ID system in The People's Daily, the mouthpiece for the Chinese Communist Party, included a plea to all passengers on affected flights and trains to report themselves.

The campaigns have turned life upside down in unexpected ways.

Ms Jia Yuting, a 21-year-old student in Wuhan, had already been back in her hometown in central China for 18 days - longer than the 14-day quarantine period - when she got news that her grandfather was sick in a nearby village.

During a visit to see him, she followed local instructions broadcast on speakers in the village and registered her personal details with the local Communist Party Committee.

When a middle-school teacher randomly reached out to her on the messaging app WeChat to inquire about her health, she realised that her data had been leaked online and was spreading on a list. 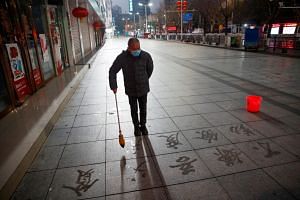 In Pictures: Empty streets in China amid coronavirus outbreak

Later, she received a threatening phone call from a man who lived in her home city. "Why did you come back Wuhan? You should have stayed there. You Wuhan dog!" she recalled him saying.

The authorities offered her no explanation for how it happened, and insisted that such leaks did not disrupt her regular life.

Three days after her visit to the village, her grandfather died.

Local officials there immediately told her family that she would not be allowed to return to the village to pay her final respects at a funeral that was taking place more than three weeks after she had returned from Wuhan.

"I feel that the villagers are ignorant and the government isn't helping; instead it's leaking the information everywhere without telling them that I don't have any symptoms," she said, adding that she felt guilty she could not be there to comfort her grandmother.

"I was very close to my grandfather. I think it's not humane - it's cruel."