BEIJING/SHANGHAI (REUTERS) - China could raise average life expectancy by 2.9 years if it improves air quality to levels recommended by the World Health Organisation (WHO), according a new study from a US research group.

China has vowed to determine the precise impact of air and water pollution on health as part of its efforts to raise average life expectancy to 79 years by 2030 from 76.3 years in 2015.

According to the Energy Policy Institute at the University of Chicago (EPIC), big air quality improvements made in the last five years have already been enough to push up average lifespans.

"China is winning its war against pollution... (The country) is due to see dramatic improvements in the overall health of its people, including longer lifespans, if these improvements are sustained," EPIC director Michael Greenstone said at an event in Beijing on Thursday (Jan 10).

According to EPIC's findings, air quality improvements made in the smog-prone northern city of Tianjin over the last five years are already expected to have raised the average lifespan of its 13 million residents by 1.2 years.

China cut average concentrations of hazardous particles known as PM2.5 to an average of 39 microgrammes per cubic m last year, down 9.3 per cent from 2017 after a campaign to curb coal use and improve industry and vehicle standards.

However, average emission levels remain significantly higher than China's own 35-microgramme standard, as well as the 10-microgramme limit recommended by the WHO. In northern industrial regions, average concentrations are much higher. 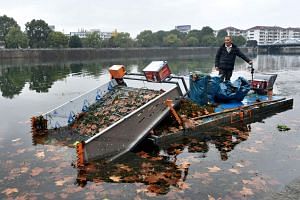 China can do more in the fight against climate change

In a study cited by state-owned news agency Xinhua on Friday, a group of top Chinese health experts identified air and water pollution as one of the major health risks in China for the next 20 years, alongside obesity, depression and Alzheimer's disease.

Chinese Premier Li Keqiang declared "war" on pollution in 2014 amid fears that the damage done to the country's environment as a result of more than 30 years of untrammelled economic growth would lead to social unrest.

However, with much of the low-hanging fruit already taken and the economy facing a slowdown, China has admitted that the campaign is under pressure.

"It would be very difficult for China to meet the WHO standards even with strong efforts to reduce industrial emissions and fossil fuel consumption," Jiang Kejun, research professor at the Energy Research Institute, a government think tank, told Reuters on the sidelines of the Thursday event.

"Emissions from non-industrial sectors, agriculture for instance, also play a big part in air pollution and are hard to put under control," he said.