SHANGHAI (REUTERS) - China could build as many as 30 overseas nuclear reactors through its involvement in the "Belt and Road" Initiative over the next decade, a senior industry official told a meeting of China's political advisory body this week.

Mr Wang Shoujun, a standing committee member of the China People's Political Consultative Conference (CPPCC), told delegates on Wednesday (June 19) that China needed to take full advantage of the opportunities provided by Belt and Road and give more financial and policy support to its nuclear sector.

"'Going out' with nuclear power has already become a state strategy, and nuclear exports will help optimise our export trade and free up domestic high-end manufacturing capacity," he was quoted as saying in a report on the CPPCC's official website.

He said China needed to improve research and development, localise the production of key nuclear components, and grow both the domestic and foreign nuclear markets to give full play to the country's "comprehensive advantages" in costs and technology.

Mr Wang, also the former chairman of the state-owned China National Nuclear Corp (CNNC), said Belt and Road nuclear projects could earn Chinese firms as much as one trillion yuan (S$197 billion) by 2030, according to more details of his speech published by BJX.com.cn, a Chinese power industry news portal.

He said 41 Belt and Road nations already had nuclear power programmes or were planning to develop them, and China only needed to secure a 20 per cent market share to create five million new jobs in the sector, according to the news portal.

CPPCC did not immediately respond to a request for comment. 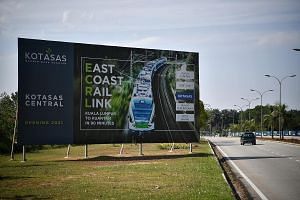 S-E Asia's cautious embrace of the Belt and Road Initiative

China is in the middle of a reactor-building programme it hoped would serve as a shop window to promote its homegrown designs and technologies overseas, especially its own third-generation reactor design known as Hualong One.

But the pace of construction at home has slowed down amid technological problems and delays at some key projects, as well as a suspension of new approvals that lasted over three years.

Mr Wang, according to BJX.com.cn, said there was currently overcapacity among local nuclear manufacturers, but the domestic market value for nuclear equipment could reach more than 48 billion yuan a year within two years. He didn't say how much it was worth currently.