BEIJING (CHINA DAILY/ASIA NEWS NETWORK) - China called on countries to use the upcoming G-20 Buenos Aires Summit to tackle climate change issues and reaffirm the commitment to the landmark Paris climate accord, according to Xie Zhenhua, China's special representative on climate change affairs.

"The vast majority of G-20 members attach great importance to combating climate change, so I believe the meeting will include such topics," Xie said on Monday (Nov 26) at a State Council Information Office news conference on an annual report of China's policies and actions in addressing climate change.

"We hope the G-20 meeting of the world's major economies will send a strong political signal, calling for more efforts to carry out the Paris climate agreement and the United Nations' 2030 Agenda for Sustainable Development," the official said.

With sustained efforts to lower emissions, China is one of the three G-20 members on track to meet their nationally determined contributions targets, according to the latest United Nations Environment Programme estimates.

The other two members are Brazil and Japan.

Xie made the remarks ahead of the G-20 Summit on Friday and Saturday, and the 24th Session of the Conference of the Parties to the United Nations Framework Convention on Climate Change in Katowice, Poland, from Sunday to Dec 14.

"I hope the developed countries will make good on the promise of the Paris agreement," Xie added. 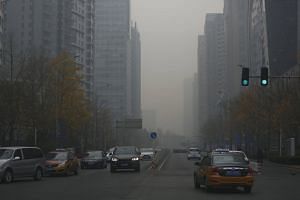 China says will strive to do better in climate change fight

China to keep up smog fight despite slowing economy

Climate of change: Can the rapidly growing region of Asean afford to go green?

"The technological and financial support will allow for developing countries' improved capabilities and higher ambitions in their positive actions.

"And we really expect to establish a mechanism to better implement the agreement and the convention," Xie said.

He cited the principles that stemmed from the Paris accord, which said developing countries would receive support in implementing climate measures.

China, the largest carbon dioxide emitter, has remained steadfast in the Paris goal of developing a green, low-carbon economy.

The report, released by the Ministry of Ecology and Environment, shows China's carbon intensity decreased by 46 per cent last year from the 2005 levels, fulfilling its goal to cut the amount of greenhouse gases per unit of GDP by 40 per cent to 45 per cent by 2020.

Nonfossil-fuel power accounted for 13.8 per cent of the country's total primary energy consumption, close to the target of increasing the share to 15 per cent by 2020, the report said.

As the nation faces economic downward pressures, China needs to find more efficient ways to lower pollution at a time when more infrastructure construction will lead to greater demand for energy consumption, according to Lin Boqiang, a professor at the China Center for Energy Economics Research at Xiamen University.