Construction will run through 2030 when the expanded airport is expected to handle 63 million passengers and 750,000 tonnes of cargo a year, the National Development and Reform Commission said in a statement.

The investment value is more than half of what China is spending on Beijing's new mega-airport project - Daxing International Airport - that costs 80 billion yuan and will serve 72 million passengers a year by 2025.

Oil- and mineral-rich Xinjiang has seen infrastructure construction spring up across the region in recent years, as it is considered by China to be a key node in President Xi Jinping's Belt and Road Initiative.

Mr Xi's multi-billion-dollar plan aims to bolster a sprawling network of land and sea links with Asian neighbours and beyond.

The central government is also investing heavily in the country's sometimes restive western regions to ease poverty and better integrate them into the national economy. Xinjiang is also heavily Muslim. 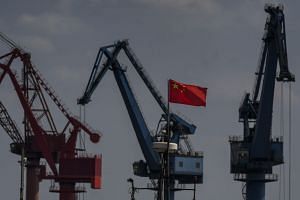 Beijing has faced an outcry from activists, foreign governments and United Nations rights experts over mass detentions and strict surveillance of the mostly Muslim Uighur minority and other Muslim groups who call Xinjiang home.

Economic growth in China's western regions slowed in the first half of the year, mostly due to a decline in fixed asset investment.

While Xinjiang is the biggest among China's provinces and autonomous regions by area, its one trillion yuan economy ranks among the smallest.

The Urumqi expansion is aimed at accommodating the rapid aviation growth in Xinjiang and spurring the growth of an international aviation hub in the city, the National Development and Reform Commission said.

China is planning hundreds of airports across the country to serve a market boosted by rising business travel and tourism fuelled by a growing middle class.

Last year, Xinjiang received more than 100 million domestic and overseas tourists, up a third on the previous year.

Many inland airports in cities such as Zhengzhou and Changsha have also expanded to serve inter-continental routes.

China Southern Airlines, which just announced plans to leave the SkyTeam airline alliance, has a hub in Urumqi.