BEIJING (WASHINGTON POST) - China has announced an array of punishments that could restrict companies' access to borrowing and state-funding support over intellectual property theft, a key sticking point in its trade conflict with the US.

News of the measures came just days after President Xi Jinping promised to resolve the "reasonable concerns" of the United States about IP practices in a statement after meeting President Donald Trump at the Group of 20 (G-20) summit last Saturday in Argentina.

The White House said the sides agreed to hold off on tariff action for at least 90 days as they negotiate to resolve specific US complaints.

China set out a total of 38 different punishments to be applied to IP violations, starting this month.

The document was released by the National Development and Reform Commission and signed by various government bodies, including the central bank and supreme court.

"I think it's potentially significant if they are implemented and result in a reduction in IP theft," said Dr Scott Kennedy, a China expert at the Centre for Strategic and International Studies in Washington.

"We've been down this road with China many times on IP. The attention companies pay to IP theft has risen dramatically, and despite the great attention it's getting, the violations have increased." 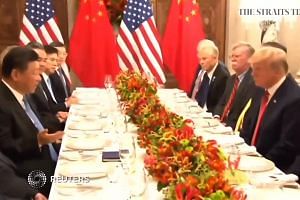 The Trump-Xi truce questions that are leaving markets flummoxed

Late last month, Beijing batted down a US accusation that China is continuing a state-backed campaign of IP and technology theft, saying it was based on hearsay and ignores reality.

The Trump administration began levying tariffs on China in July after a so-called Section 301 investigation by the US Trade Representative's office alleged that China's IP and technology transfer policies are causing multiple billions of dollars in damage to US companies.

In an update released last month, the USTR said China was continuing its unfair IP policies and it accused Beijing of continuing a state-backed campaign of cyber attacks on American companies that were both intensifying and growing in sophistication.

China says violators would be banned from issuing bonds or other financing tools, and participating in government procurement.

In addition, violators will be recorded on a list, and financial institutions will refer to that when lending or granting access to foreign exchange.