BEIJING - China’s parliament passed an interpretation of Hong Kong’s Basic Law on Monday (Nov 7) that says lawmakers must swear allegiance to the city as part of China, ​in Beijing's ​boldest intervention in the city ​​since the 1997 handover.

The move came after two pro-independence lawmakers in Hong Kong pledged allegiance to a "Hong Kong nation" and unfurled banners proclaiming “Hong Kong IS NOT China” when they were being sworn into office last month.

"Those who declare Hong Kong independence not only have no right to run for the legislature and be a lawmaker, they should also be subject to legal responsibilities," said the National People's Congress (NPC) in an eight-page document distributed to journalists ahead of a briefing at the Great Hall of the People in Beijing.

Acts of declaring and promoting Hong Kong independence, said the NPC, are akin to the secessionist behaviour prohibited under Article 23 of the Basic Law. Such action, according to NPC, violates Article 1 stating that Hong Kong is an inseparable part of China, and Article 12 stating that Hong Kong enjoys a high degree of autonomy but comes under the jurisdiction of the Chinese government.

The NPC said it decided to issue the interpretation to deliver "an effective strike and curb against Hong Kong independence movement" and also to protect China's national sovereignty.​ 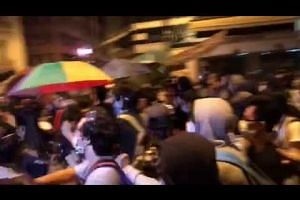 Four arrested in Hong Kong after 8-hour stand-off between police and 4,000 protesters

“Any words or deeds that deliberately contravene (the interpretation’s) requirements, defy the prescribed oath-taking procedures, or even use the opportunity to insult the country and the Chinese people and advocate cessation, must be stopped in accordance with the law,” Leung said.

He also raised the possiblity of enacting Article 23, a long-shelved anti-subversion law which touched off massive protests in the city in 2003.

“The Hong Kong Special Administrative Region shall enact [the law] on its own. We have not seen anyone advocating independence in the past but now we see it. This indeed deserves our attention.”

The Hong Kong Bar Association has said an intervention by Beijing now, while a local court was hearing the case, would deal a severe blow to the city’s judicial independence and undermine international confidence in Hong Kong’s autonomy.

​​Thousands of Hong Kongers took to the streets on Sunday against Beijing's move, with hundreds clashing with police overnight around China’s representative office in Hong Kong on Monday.

Hong Kong’s justice secretary Rimsky Yuen told reporters on Monday he had "every confidence" that the former British colony’s judiciary will uphold the rule of law, reported Reuters.

Dr Tian Feilong, a law expert at Beijing's Beihang University, said Beijing's move this time is much bolder and tougher than the previous four times the NPC interpreted the Basic Law.

"This interpretation is targeted at the pro-independence (forces), and is meant to uphold the authority of the Basic Law. The central government foresee that the local Hong Kong authorities are powerless to uphold the law, and require specific support from Beijing, " said Dr Tian.

"Beijing has chosen to proactively issue an interpretation and this does not only affect the two lawmakers in question, it has implications on the other cases that are being deliberated by the Hong Kong court," he added.

"Beijing is aware that this move will worsen the confrontation (between the pro-independence the central government), but it has deemed that it must take timely actions to help the Hong Kong authorities resolve this constitutional crisis," he said.

"Beijing is in crisis management mode."

Britain returned Hong Kong to Chinese control in 1997 under a “one country, two systems” formula that gave the territory wide-ranging autonomy, including judicial freedom guided by the Basic Law.

To China, it is radical lawmakers like Leung and Yau, who were elected to the Legislative Council in September despite the city government’s decision to bar some of the movement’s more radical members from running, who have deepended the rift between Hong Kong and Beijing and damaged the territory’s rule of law.

In strongly-worded closing remarks at Monday's media briefing, Basic Law committee chairman Li Fei appealed for national unity by recounting the atrocities committed by the Japanese in Hong Kong during World War II. He also warned that all traitors will not come to a good end.

The NPC​, which issued the interpretation after a meeting of its standing committee since last Wednesday,​ also laid out on Monday the format for the swearing-in of public officials​.

​T​hose who refuse to​ be sworn in ​will not be allowed to take up the post, it said. Oath-taking must be done in a "sincere and solemn" manner and clearly contain the two-point criteria of upholding the Basic Law and staying loyal to Hong Kong.

Oath-taking must ​also ​be done under the watch of "oath supervisors" who will decide if it was done in accordance to law. Those who fail to take oaths properly will not be allowed to do so again, said the ruling.