KASHGAR, CHINA (NYTIMES) - Kashgar is an ancient town in north-west China. Hundreds of thousands of Uighurs and other Muslims from this region have been detained in camps, drawing international condemnation. But outside the camps, Uighurs also live in a virtual cage.

China has built a vast net of controls that shows the Communist Party's vision of automated authoritarianism. Neighbours become informants. Children are interrogated. Mosques are monitored.

We visited Kashgar several times to see what life is like. We couldn't interview residents - that would have been too risky for them because we were constantly followed by the police. The restrictions were everywhere.

Every 100m or so, police stand at checkpoints with guns, shields and clubs. Many are Uighurs. The surveillance couldn't work without them.

Muslim minorities line up, stone-faced, to swipe their official identity cards. At big checkpoints, they lift their chins while a machine takes their photos, and wait to be notified if they can go on.

The police sometimes take Uighurs' phones and check to make sure they have installed compulsory software that monitors calls and messages.

Xinjiang is in China's far west, but it feels more like part of Central Asia. Ethnic minorities - including Uighurs, Kazakhs and Tajiks - outnumber the Han Chinese majority here. They are mostly Sunni Muslims with their own cultures and languages.

Every so often, a police officer in uniform stopped us, searched our phones for pictures and deleted any they said were sensitive.

Sometimes their choices made no sense. One officer erased a picture of a camel, though I was able to restore it. "In China, there are no whys," he said.

For Uighurs, the surveillance is even more pervasive. Neighbourhood monitors are assigned to watch over groups of families. An army of millions of police and official monitors can question Uighurs and search their homes. They grade residents for reliability. A low grade brings more visits, maybe detention.

Ms Dilnur fled Kashgar to Turkey three years ago and has lost touch with her family in Xinjiang. But she remembers the searches: "They don't care if it's morning or night, they would come in every time they want."

Orphanages have been taking away the children of detainees. We don't know how many, but the government says that orphanages held 7,000 children across Kashgar alone last year.

Surveillance cameras are everywhere. In streets, doorways, shops, mosques. We counted 20 cameras on one stretch of street.

In one little shop, dozens of locals come every day to buy samsa, a baked pastry filled with mince. Here too, and in nearly every shop, cameras are watching. 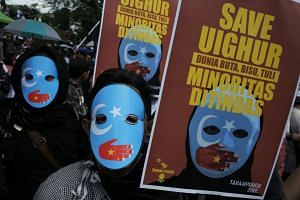 Tens of thousands detained in China's Xinjiang, US diplomat says

The cameras and checkpoints suck up oceans of information about people. But who is viewing all these images?

Chinese companies are earning a fortune selling this surveillance technology. They make it sound like a sci-fi miracle allowing the police to track people with laser precision.

But spend time in Xinjiang and you see that the surveillance state acts more like a sledgehammer - sweeping, indiscriminate; as much about intimidation as monitoring.

The intimidation works. We visited one of the few mosques in the city that remain open, the famed Id Kah mosque. Only a few dozen men came for the main prayers on a Friday, the main Islamic day of worship. A few years ago, thousands of worshippers gathered.

At the mosque, worshippers register and go through a security check. Inside, they pray under surveillance cameras that the police can monitor.

Children are interrogated. "In the kindergarten, they would ask little children, 'Do your parents read the Quran?'" Ms Dilnur told us. "My daughter had a classmate who said, 'My mum teaches me the Quran.' The next day, they are gone."

The very architecture of Kashgar has been altered to make the city easier to control.

The Old City, a maze-like area of mud brick homes, has mostly been demolished. The government said it was for safety and sanitation. But the rebuilding has also created wider streets that are easier to monitor and patrol.

Some areas are still undergoing demolition and reconstruction.

The new brick homes seem more comfortable, but Uighurs mourn their old neighborhoods. Tourists wander the refurbished alleys, often unaware of the ancient lanes they replaced. But visitors are kept far from the indoctrination camps on the edge of town.

One piece of land in southern Kashgar was empty in August 2016. Today, it is a re-education camp with a capacity of roughly 20,000 people. The government says it is a vocational training centre. A recent satellite image shows the camp occupies more than two million square feet.

This camp is not the only one growing. Thirteen camps in Kashgar have all jumped in size, reaching more than 10 million square feet last year.

Tourists have been returning. But many Uighurs still live in corrosive fear. A careless comment, a vengeful neighbour, a frightened child - all could lead to questioning, searches, and maybe time in an indoctrination camp.