TOKYO (AFP) - Once a revered titan of the auto industry, Carlos Ghosn appeared in a Tokyo courtroom on Tuesday (Jan 8) in handcuffs to offer his first public statement since his arrest.

Here are some of the allegations against Ghosn and the public rebuttals he offered in court:

Prosecutors allege that Ghosn, with the help of his right-hand man at Nissan Greg Kelly - also under arrest but freed on bail - under-reported his compensation in financial documents for at least eight fiscal years.

Ghosn has already been charged with under-reporting his compensation from 2010-2015, and prosecutors are investigating the following three years.

They allege the scheme involved deferring some of Ghosn's compensation until his retirement - possibly to avoid criticism over his hefty pay - and that failure to declare that constitutes financial misconduct.

In total, prosecutors say, he under-reported his pay by nine billion yen, or around US$83 million.

In court Tuesday, Ghosn strongly denied the allegations, saying the figures were based on an internal benchmark he kept that came from job offers he received from other firms while at Nissan. 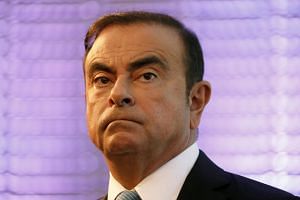 "It had no legal effect; it was never shared with the directors; and it never represented any kind of binding commitment," he told the court.

He said he "understood" that draft proposals for post-retirement compensation were "reviewed by internal and external lawyers, showing I had no intent to violate the law".

Ghosn added that if he died today - what he described as the "Death Test" - Nissan would not be required to pay his heirs anything but his retirement allowance, which he said showed there was no binding committment for additional pay.

Prosecutors allege that Ghosn tried to shift losses on two foreign exchange contracts to Nissan's books when the value of the yen soared and the Japanese automaker's shares plunged during the 2008 financial crisis.

They allege that when Ghosn failed to get Nissan to shoulder the losses, he then had a Saudi business acquaintance put up the additional collateral demanded by the bank holding the contracts.

He is then accused of having transferred US$14.7 million in Nissan money to the associate to compensate him for the collateral.

In court Tuesday, Ghosn acknowledged that he had taken out foreign exchange contracts from 2002, after Nissan refused to pay him in dollars, as a hedge against yen fluctuations.

He said the bank demanded increased collateral on the contracts after the financial crisis, which he was unable to secure unless he resigned from Nissan and received his retirement allowance.

Instead, he decided to "ask Nissan to temporarily take on the collateral, so long as it came to no cost to the company... the FX contracts were then transferred back to me without Nissan incurring any loss".

Ghosn said the money transferred to the Saudi associate, whom he named as Khaled Juffali, was for work he had done for Nissan, describing him as a "long-time supporter and partner" of the firm.

He said Juffali's company "was appropriately compensated - an amount disclosed to and approved by the appropriate officers at Nissan" in return for "critical services" he provided the firm.

A statement issued on behalf of Juffali’s company by a PR firm also defended the money as payments for “legitimate business purposes”.  The statement said Juffali’s company provided services including resolving a dispute with a local Saudi car firm and lobbying to secure approval for a plant in the kingdom.

Homes, and a job for his sister

There are several additional allegations against Ghosn made by sources with knowledge of the Nissan investigation into its former chairman.

Prosecutors have yet to publicly accuse Ghosn of these claims, however.

Among them are accusations that Ghosn used a subsidiary purportedly set up to help fund Nissan's tech investments to pay for personal residences in Rio de Janeiro, Beirut and Paris.

In mid-December, the firm filed an injunction in Brazil intended to protect its right to pursue a case against Ghosn's sister.

He did not address either of these allegations in court, but insisted he had been "wrongly accused and unfairly detained based on meritless and unsubstantiated accusations".

"Your Honour, I am innocent of the accusations made against me," he said.