WASHINGTON - It is a question on many people's minds. Democrat presidential candidate Hillary Clinton raised it during the 2016 presidential campaign, asking voters to ponder if her opponent Donald Trump should be entrusted with the world's most deadly arsenal: 6,800 nuclear weapons.

She said Mr Trump's tweets are evidence he should be kept away from the nuclear codes.

He cannot be trusted "to have his finger on the nuclear button", she said during the third and final presidential debate in late 2016.

Mr Trump went on to win the election and his words - and tweets - during his first year in office have continued to cause much anxiety among lawmakers and experts over his access to nuclear weapons.

Mr Trump's latest tweet again raised questions on the safeguards, if any, to prevent one person from making an impetuous decision that will lead to catastrophic consequences.

Here are six pressing questions on the issue.

1. Can Trump order a nuclear strike at the push of a button?

There is no button to press, say experts.

"There is no button that any president pushes, no switch, no toggle gear, no one thing that the president simply walks around with and can say, 'Click, I've launched the nuclear weapons'," senior lecturer Krister Knapp of Washington University's History Department told a CBS radio programme.

The process begins with the president opening the "football", or the black satchel that he carries around at all times. The "football" contains the nuclear codes, the contingency plans and the communication device to send those codes.

Only the president is able to open the satchel, which is locked with an electronic lock. He carries around a separate, different set of codes on a small card about the size of a credit card, known as famously "the biscuit". The "biscuit" has his access, his identity code information.

Only those sets of numbers - and only after they are entered in the right order - will the president then be able to open the satchel, Knapp told CBS.

While the first use of nuclear weapons is generally prohibited under international law, the speed of executing a strike means it would be difficult to stop the president if he decided to launch a unilateral attack, says Mr Bruce Blair, a former nuclear missile launch officer and co-founder of Global Zero, a group that advocates eliminating nuclear weapons.

The nuclear codes are "the length of a tweet", he told NPR news website in a recent article.

"It would take them one or two minutes to format and transmit that directly down the chain of command to the executing commanders of the underground launch centres, the submarines and the bombers."

Bloomberg consulted Mr Blair, a former Minuteman missile-launch officer and research scholar at Princeton University's Program on Science and Global Security, to spell out the step-by-step procedure for land- and sea-based missiles.

2. How long does it take to launch a nuclear-tipped missile?

Mrs Clinton said that it takes "about four minutes" for the US to launch a nuclear weapon after a president's order is issued.

A 2013 report by the United Nations Institute for Disarmament Research said that ICBMs are "capable of launching within five minutes" of a president's order.

America's nuclear-tipped Minuteman ICBMs are named after their ability to launch within minutes when on high alert.

If there was an imminent strategic threat to the United States, i.e. if an inbound launch of ICBMs from a hostile state had been detected and were minutes from reaching the US, then "the president has extraordinary latitude to take the sole decision to launch", a former senior White House official told BBC Security Correspondent Frank Gardner.

On Nov 29, North Korea tested its most advanced ICBM, the Hwasong-15 missile, which it claims puts the entire US mainland within range.

Mr Kim said in his New Year message that his country would focus on mass-producing nuclear warheads and ballistic missiles for operational deployment this year.

"These weapons will be used only if our society is threatened," he added. 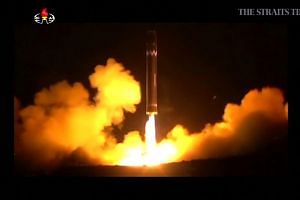 3. Are there any checks and balances on the Commander-in-chief's powers?

Mark Fitzpatrick, a nuclear non-proliferation expert at the International Institute for Strategic Studies in Washington, says that ultimately, the sole authority to launch a strike rests with the president.

"There are no checks and balances on the president's authority to launch a nuclear strike," he told BBC News.

"But between the time he authorises one and the time it's carried out there are other people involved."

The commander of US Strategic Command, Air Force General John Hyten, said in November that he would challenge a strike order from Mr Trump if it were illegal.

Retired Air Force General Robert Kehler, former commander of the US Strategic Command, said he did not know what would happen if Mr Trump ignored the military's order to stand down on a nuclear strike deemed illegal.

Massachusetts Republican Senator Ed Markey has proposed legislation that would require congressional approval for any first use of nuclear weapons.

4. What has Trump said about US nuclear arsenal?

In December 2016, president-elect Trump caused alarm when he called for a strengthening of America's nuclear weapons programme.

The US "must greatly strengthen and expand its nuclear capability until such time as the world comes to its senses regarding nukes", he tweeted. He later had an off-air phone conversation about the tweet with MSNBC TV host Mika Brzezinski, who said Mr Trump told her: "Let it be an arms race. We will outmatch them at every pass and outlast them all."

MSNBC did not play his comments on air.

A nuclear arms race is diametrically opposed to decades of Republican orthodoxy that has called for cuts in US nuclear weapons since the Ronald Reagan administration.

Mr Trump earlier had threatened North Korea with possible nuclear annihilation,saying: "They will be met with fire and fury like the world has never seen."

5. How much is US spending on its nuclear arsenal?

The US is in the midst of a US$1-trillion (S$1.3 trillion), 30-year modernisation of its ageing ballistic missile submarines, bombers and land-based missiles, a price tag that most experts say the US cannot afford.

Russia, also bound by the treaty limits, is also carrying out a modernisation programme but is not expanding its warhead stockpile.

Over 90 per cent of the world's nuclear weapons are in the US and Russia. Since the end of the cold war, the rivals have worked to curtail production and cut their nuclear stockpiles.

A government funding Bill signed by Mr Trump last month allocates over US$4.6 billion for missile defence from North Korea and Iran.

6. Which countries in the world have nuclear weapons?

Five other countries house the warheads (Belgium, Germany, Italy, Netherlands and Turkey) and 23 others are part of nuclear alliances.

The Nobel Peace Prize was awarded last month to the International Campaign to Abolish Nuclear Weapons (ICAN) for "its work to draw attention to the catastrophic humanitarian consequences of any use of nuclear weapons", as its representatives warn of "an urgent threat" over US-North Korea tensions.

Mr Trump has previously said he would encourage Japan, South Korea and Saudi Arabia to acquire nuclear weapons so they would not have to rely on US aid.