In its editorial, the paper says that if Pope Francis agrees to visit North Korea, it might help to improve the human rights and religious freedom situation in the country.

As leaders of the formerly antagonistic states prepare for a second meeting, Moon is working on another historic mission: realising Pope Francis' visit to North Korea.

Moon's spokesman said that Moon, who will embark on a nine-day European tour on Saturday, will pay a call to the pope on Oct. 18 at the Vatican and discuss the proposal.

According to the spokesman, Moon made the suggestion to invite the pope when he met Kim in Pyongyang last month, to which the North Korean leader responded positively.

"We will give the pope an enthusiastic welcome if he visits North Korea," the spokesman quoted Kim as telling Moon.

This recalls that in 2000 President Kim Dae-jung made the same suggestion to North Korean leader Kim Jong Il, the current leader's father, when they met in Pyongyang.

The elder Kim sent an invitation to the Vatican, but the plan to invite Pope John Paul II did not go well. 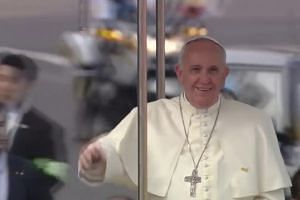 Archbishop Hyginus Kim Hee-joong, who was a member of the entourage that accompanied Moon on his visit to the North, mentioned another episode illustrating Kim's interest in the Vatican.

The archbishop said that Kim replied "Yes, please," when he told him he would personally inform the Vatican that South and North Korea were moving toward reconciliation and peace.

If the highly popular pope visits the North, it certainly would invoke a lot of repercussions.

Most of all, it would provide a boost to the peace mood on the peninsula that has been fostered by a series of meetings between the leaders of the two Koreas and US President Trump.

Since taking the helm of the Roman Catholic Church in 2013, Pope Francis has often touched on peace and reconciliation on the Korean Peninsula.

His 2014 visit to South Korea, which was his first trip as pope to Asia, was also highlighted by an emphasis on peace on the peninsula.

Besides facilitating the peace process that centers on the denuclearisation of the North and improvement of the North's relations with South Korea and the US, a papal visit to the country would help increase international awareness of human rights and religious freedom there.

North Korea's suppression of human rights and religious freedom have already been verified and documented numerously.

Testimonies from survivors of political camps in North Korea and defectors point to a human rights situation in the country is still grim.

A 2014 report by the UN Commission of Inquiry on North Korea said that there was "an almost complete denial of the right to freedom of thought, conscience and religion".

The report recommended the UN take action on the situation, including referral to the International Criminal Court.

The North's constitution guarantees freedom of faith, but what has been known to the outside world is that there are only two Protestant churches and one Catholic church in the country. Defectors say the churches are showcases for propaganda purposes.

Thae Yong-ho, a former North Korean diplomat who resettled in the South in 2016, said in his recent memoir that North Korea opened the churches mainly to interact with South Korean religious groups critical of the government in Seoul.

Thae also said he was a member of a Foreign Ministry task force formed in 1991 on orders from then leader Kim Il-sung, the current leader's grandfather, to work on a visit to Pyongyang by Pope John Paul II.

Kim promoted the plan to get the North out of diplomatic isolation, but gave up due to concerns a papal visit could encourage ordinary North Koreans to turn to Catholicism.

It remains to be seen if the current leader, who is more open to the outside world than the previous two generations, is confident enough about receiving the pope and pushes ahead with the invitation.

What's certain is that if Pope Francis' visit is realised, it should be an occasion to increase international pressure on the North to improve its human rights situation and religious freedom.

This is all the more important because North Korea's rights issues are now being overshadowed by denuclearisation and other security issues.