A top business group and a lawmaker who supports the Bill allowing extraditions to China questioned Mrs Lam's rush to push it through after protests turned violent a day earlier, shutting down the city centre.

Only a handful of singing protesters were gathered near the city's legislative complex on Friday (June 14) after the government scrapped plans to resume the debate this week.

"So far, everybody is very unhappy with the way the government handled it," Mr Felix Chung, who represents the textile and garments industries as a pro-establishment member of Hong Kong's legislature, said in a phone interview.

"I believe most people in Hong Kong do not agree with the reasons why it has to be that rushed."

So far, Mrs Lam has insisted on pushing ahead with the Bill, despite protests that have drawn hundreds of thousands of people onto the streets over concerns it would further strengthen Beijing's grip over Hong Kong.

Critics say the move could prompt the United States to reconsider the city's special trading status, drive away foreign companies and imperil critics of the Communist Party. 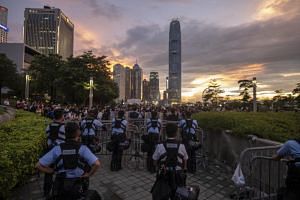 Bolstering those concerns, a bipartisan group of US lawmakers including House Speaker Nancy Pelosi, a California Democrat, reintroduced the Hong Kong Human Rights and Democracy Act. Among other provisions, the measure threatens to freeze US assets of individuals involved in forcibly removing people from Hong Kong. Such individuals also could be denied travel visas.

Hong Kong's General Chamber of Commerce, which says it represents businesses employing a third of the local workforce, said large-scale protests show the public has "serious apprehensions" about the Bill.

"We sincerely urge the government to continue to listen to stakeholders and engage in meaningful dialogue with the public," Mr Aron Harilela, the group's chairman, said in a statement, adding that it agrees with the underlying principle of the Bill.

Ms Shirley Yuen, the Chamber's chief executive officer, added in a statement: "We call for restraint from all parties to ensure that this issue will not undermine business confidence in Hong Kong and our international reputation."

Images beamed from the protest on Wednesday showed police beating back protesters with batons and crowds running from clouds of tear gas near some of the world's most recognisable skyscrapers, in an area home to multinational companies, luxury hotels, banks and the US Consulate.

Hong Kong's Hospital Authority confirmed that 72 people had been injured.

On Thursday, a small crowd of people wearing masks to hide their identities gathered at midday in the city centre while police with pepper spray canisters briefly amassed in the legislature building nearby. But the area remained largely calm.

The government's headquarters was closed for the day, but several main thoroughfares shut down by Wednesday's stand-off were reopened.

Hong Kong Police Commissioner Stephen Lo said officers had acted in accordance with guidelines on Wednesday and had shot 150 rounds of tear gas at protesters. He said 22 police officers had been injured.

Opposition lawmakers repeated calls for Mrs Lam to withdraw the Bill, saying Legislative Council chairman Andrew Leung would send further notice on when the next reading would take place. Mrs Lam on Wednesday made an emotional defence of the Bill, which she argues is necessary to prevent the city from becoming a refuge for fugitives.

China on Thursday repeated its position that Hong Kong's affairs should remain "purely internal" and condemned what it said was protester violence.

Ms Pelosi said on Wednesday that the Hong Kong Bill's passage would lead the US to review the city's special trading privileges.

British Foreign Secretary Jeremy Hunt spoke with Mrs Lam on Thursday and called on Hong Kong to engage in a dialogue with protesters. The city was returned from British rule in 1997.

US President Donald Trump said he was confident Hong Kong and China would resolve their differences over it. "I'm sure they'll be able to work it out," he said.

Mr Chung said opponents of the Bill were exaggerating its pitfalls, and protections were added to safeguard against misuse. The statements by foreign governments questioning the Bill have only fuelled Beijing's resolve to pass it, even though "it's not such a big deal to delay it or make amendments", he said.

"Now it's been raised to an international, diplomatic level," Mr Chung said. "That is why the central government and Hong Kong are standing so firm on this Bill now."