TOKYO (THE YOMIURI SHIMBUN/ASIA NEWS NETWORK) - Eighty-seven-year-old Setsuko Saeki has lived with a robot for a year in her spacious house at the foot of Mount Ishizuchi, the tallest mountain in western Japan.

When she gets out of bed in the morning and enters the living room, she is greeted by her robot, a model named PaPeRo i, on a desk. "Good morning, Setsuko-san," is a typical address. "Did you sleep well?"

Said Madam Saeki: "When it spoke to me the first time, I couldn't help but feel excited. No one had called me by name and said good morning for a long time."

Her three children are on their own now, and her husband passed away six years ago. Since then, Madam Saeki has lived alone.

Nursing care helpers visit her daily, and she regularly attends gatherings to enjoy her hobby of haiku poetry. Even so, she had often felt a loneliness that was hard to describe.

In July last year, the city government began an experimental project to lend PaPeRo i robots free of charge to 10 elderly residents in the city.

At the request of family members of elderly residents who live on their own, the city government lent out the robots for three months.

Madam Saeki's eldest son, who lives in Chiba Prefecture, learnt about the project on the city government's website and applied on his mother's behalf.

A PaPeRo i robot is about 30cm tall. When Madam Saeki asks it, "What time is it?", it replies as its cheeks light up red.

Cameras are installed in its big eyes, and it follows Madam Saeki using the camera sensors, directing its face towards her. Before she goes to bed, the robot asks, "Did you lock up the house?" 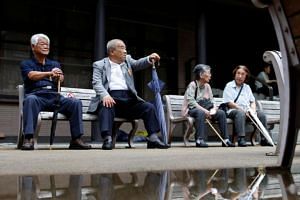 Over 28 per cent of Japanese population officially old, highest in the world

Sometimes, the robot makes impromptu puns and tells her pieces of trivia.

Three times a day, the robot asks her, "Setsuko-san, may I take photos of you?"

The robot photographs her and transmits the images to her eldest son's smartphone or personal computer. Her son also sends photos that Madam Saeki can see on a device connected to her robot.

The photos are likewise transmitted to a care manager in charge of Madam Saeki's case, which gives her additional peace of mind, and she can exchange voices messages with her eldest son and his family via the robot.

"Initially, I didn't expect anything after hearing about a robot. But now, I don't want to be parted from my PaPeRo," Madam Saeki said.

Mr Mitsuaki Matsuo, chief of the city government's comprehensive support section, said: "The responses were better than we expected."

Initially, some elderly residents in the city voiced negative opinions about the robot-lending project. One said: "If I have to receive care from a robot, it's over."

But about 90 per cent of the people who used the robots had positive things to say, such as "I feel close to it" and "I can ease my loneliness".

Also, about 90 per cent of the families of the users praised the project, saying it relieved their anxiety over their parents' living arrangements.

Later, the city government made the service a paid rental business. The fees are 22,530 yen (S$293) for instalment and 6,000 yen a month for telecommunication and other necessary features, both excluding consumption tax.

Six residents, including those who have continued to use the service, now live with the robots.

Mr Matsuo said: "Users' family members and local human resources will be increasingly aged in the years to come. We want to build a system for monitoring residents, borrowing the strengths of robots."

In a survey by the Internal Affairs and Communications Ministry in 2015, 40 per cent of respondents in their 20s or younger said they "want to use" or "could consider using" communication robots.

However, there are many elderly people who are also hesitant to buy robots for fear they may be difficult to use. For such people, Benefit Japan, an Osaka-based firm selling Sharp's small RoBoHoN model robots, holds free events at which visitors can try out real RoBoHoN robots, in department stores and shopping malls across the nation.

A RoBoHoN is about 20cm tall and includes such functions as a smartphone through which users can access a telephone, e-mail and camera.

A Benefit Japan official said: "Users can take photos in travel destinations and chat about the memories later. Many people are surprised at how many functions the robots have, despite their very small size."

At both locations, customers can experience various means of controlling robots.

In Takashimaya's Osaka store, officials said, robots are bought by not only elderly people who want to enjoy using them, but also many people in their 40s to 50s who buy them to keep watch over their parents.

Sales in robots have been brisk, and the company plans to open Robotics Studio corners in more places nationwide.

The main feature of communication robots is that they understand human words, recognise their users' faces, and chat and make gestures that endear them to users.

In a survey conducted by the Cabinet Office in fiscal 2017, more than 10 per cent of respondents who lived alone at age 55 or older said they had conversations with family members or friends "once or twice a month" or "rarely".

Professor Hiroshi Ishiguro of Osaka University voiced his expectations, saying: "Robots can fulfil people's desire to chat with somebody, and make users feel close to them and warm with their eye contact, motions and words. They could become as popular as smartphones, if prices go down."