TAIPEI (BLOOMBERG) - For officials in Beijing looking for a Taiwanese presidential candidate who improves the island's fraught ties with the mainland, Mr Han Kuo-yu is saying all the right things. The question is whether he runs.

The new mayor of the southern city of Kaohsiung last month described Taiwan and China as partners in an "arranged marriage" who had fallen "madly in love".

He has also said that peace talks were "inevitable" between the democratically run Taiwan and the Communist Party-ruled mainland.

Such blunt talk contrasts with Taiwan's current president, Ms Tsai Ing-wen, a cautious critic of China who's bracing for a tough re-election fight after bruising policy battles and an isolation campaign by Beijing.

Mr Han's shock defeat in November of a candidate from Ms Tsai's Democratic Progressive Party (DPP) in the ruling bloc's stronghold catapulted him to the top of the list of possible presidential hopefuls from the China-friendly Kuomintang (KMT).

While Mr Han has sidestepped questions about whether he will run - telling Hong Kong's Sing Tao Daily "let's see in the future" - his travel schedule suggests someone with bigger ambitions.

On Friday (March 22), he begins a week-long trip to Hong Kong, Macau and the mainland cities of Shenzhen and Xiamen. Next month, he will visit the United States.

Mr Han's success in winning over younger voters who usually identify with the pro-independence DPP has built buzz among KMT supporters and others who want closer China ties. But the 61-year-old's rough-and-tumble style, including scuffling with other politicians and accusations of sexist remarks, also presents a potential liability in a high-profile campaign. 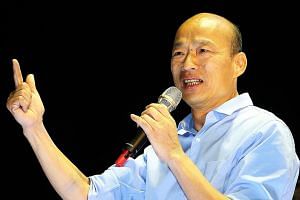 "The reason why Han has become a discussion topic is his outlier character," said Professor Alexander Huang of Taiwan's Tamkang University.

"He is a non-traditional KMT politician, since the KMT values seniority, while Han is more grassroots and daring to challenge and speak up. As to whether he is a good presidential candidate, I think he still needs a lot of help."

The KMT is anxious for a win after losing both the presidency and the parliament majority in 2016 - derailing its push for closer economic ties with Beijing. Chinese President Xi Jinping, who held a historic meeting with Taiwanese counterpart Ma Ying-jeou weeks before the vote, has cut off communications with Ms Tsai's government and led a campaign to isolate her island diplomatically.

Ms Tsai now looks vulnerable, receiving the support of less than 20 per cent in recent polls, as she grapples with both voters concerned about deteriorating ties with China and those who want a cleaner break.

Earlier this week, Ms Tsai's former premier, independence advocate Lai Ching-te, announced that he would challenge her for the DPP nomination next month.

Still, a survey released this week by broadcaster TVBS found Mr Han with 38 per cent support in a three-way race with Taipei Mayor Ko Wen-je (28 per cent) and Ms Tsai (18 per cent).

Ms Tsai has sought to push back against Mr Han's pro-China remarks, saying there can't be an arranged marriage with China because Taiwan is sovereign and its people have the freedom to choose.

Others observing from Beijing argue Mr Han's candidacy could lead to a breakthrough between the long-time rivals. He supports the idea both sides are part of "one-China" - a negotiating framework Ms Tsai has refused to endorse.

"If he wins in 2020, it is likely that he will reverse Tsai's cross-strait policies," said Prof Wang Dong, an international relations professor at Peking University and secretary general of the Pangoal Institution, a Beijing-based research group.

"The mainland, of course, would have much more trust in him."

Kaohsiung city spokesman Anne Wang said on Thursday that Mr Han was focused on promoting the local economy and "will not think about other plans for the time being".

This week's trip was intended to promote economic and cultural exchanges and not touch on politics, she said.

The trip will test Mr Han's ability to navigate sticky issues on the mainland and in the fractious former British colony of Hong Kong. His past forays into the public eye have been rocky.

When he was a legislator in 1993, Mr Han punched future DPP president Chen Shui-bian, putting him in the hospital. As president of the Taipei Agricultural Products Marketing Co in 2016, he dared a city councillor to swallow a hockey puck during a dispute.

During his run for mayor, he told a gathering of female supporters that anyone who created 1,000 jobs in Kaohsiung would get a kiss. Earlier this month, he was forced to apologise after dismissing the idea of attracting white-collar workers from the Philippines and saying "it was hard to believe maids could become English teachers".

Mr Han successfully cast himself as the "CEO mayor" during the campaign, propelled in part by a social media campaign led by his Canadian-educated daughter Coco Han. His focus on economics on platforms such as YouTube and Facebook helped garner robust support from younger voters looking for higher wages.

One of his slogans was: "With goods sold and talent flowing in, Kaohsiung's people will make a fortune."