In its editorial, The Yomiuri Shimbun says the TPP’s role is also important from the viewpoint of countering the self-serving United States

TOKYO (THE YOMIURI SHIMBUN/ASIA NEWS NETWORK) - It is significant that a high-level free trade zone will come into being in the fast-growing Asia-Pacific region. A more solid framework for international cooperation must be created.

A bill has been passed into law to implement the revised Trans-Pacific Partnership (TPP) multilateral free trade pact, composed of 11 countries, including Japan and Australia. In preparation for the effectuation of the accord, the law incorporates measures to boost support of agriculture and the protection of intellectual property rights.

When put into effect, the flow of people, goods and capital across borders will be stimulated — in return for nations being pressed to open their own markets — making it likely that the potential for growth will increase.

It should be welcomed that the domestic procedures for Japan to take part in the TPP have been completed.

Resistance from the opposition camp was not so fierce as it was during the Diet deliberations before the United States withdrew from the pact.

It can be rated highly that, through prolonged verbal arguments, a certain degree of understanding has developed regarding the benefits of free trade.

It takes into account unfair trade and business practices by such countries as China.

Should the TPP rules become international standards, it will be difficult for China to continue following such practices. 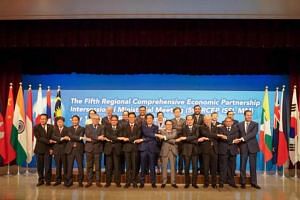 It is appropriate to strive to hold China, which is pursuing hegemony in both the economic and security spheres, in check.

Japan is also negotiating the Regional Comprehensive Economic Partnership (RCEP) — a trade deal participated in by 16 countries, including China — with the aim of reaching an agreement this year.

It is necessary to bring the content of the agreement in such areas as trade, investment and intellectual property as close as possible to the levels reached under the TPP. Japan’s leadership will be called for.

The United States has been high-handedly advancing protectionist policies, including imposing punitive tariffs on Japan and the European Union.

Methods like attempting to reduce the trade deficit by force are not permissible.

The TPP’s role is also important from the viewpoint of countering the self-serving United States.

Reinforcing economic ties with many countries under fair rules and reciprocally enjoying the benefits of free trade.

To transmit this principle of the TPP to the world and exert pressure on the United States is another serious obligation Japan should fulfill.

The accord will take effect 60 days after six member countries complete their domestic procedures. Japan and Mexico have already done so.

Japan, which has led the way in completing the procedures, should call on other participant countries to complete their procedures promptly, thus bringing the accord into effect at an early date.

There are a number of countries, such as Thailand and South Korea, that are interested in newly joining the accord. To reinforce international efforts to contain the United States, and to block protectionism, the expansion of participating countries is also important.