KATHMANDU (AFP) - The bodies of top mountaineer Alex Lowe and his cameraman have been found in a Himalayan glacier, 16 years after they were buried by an avalanche on one of the world's highest mountains.

Two climbers last week came across the men's remains "still encased in blue ice but beginning to emerge from the glacier", a foundation set up in Mr Lowe's memory said in a statement.

Mr Lowe, 40, and expedition cameraman David Bridges, 29, both American, were swept away by a massive snow and ice avalanche on the 8,027m Shisha Pangma peak in China in October 1999 while attempting the first American ski descent.

Mr Conrad Anker, who survived the avalanche and went on to marry Mr Lowe's widow and adopt their three sons, said the discovery had brought "closure and relief" to the family. 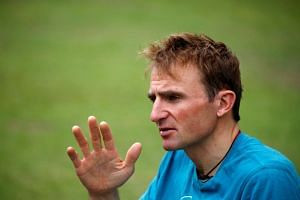 They will travel to the Tibetan mountain - one of only 14 in the world measuring over 8,000m - to retrieve the bodies.

"Alex's parents are thankful to know that their son's body has been found and that Conrad, the boys and I will make our pilgrimage to Shisha Pangma," said Mr Lowe's widow Jennifer Lowe-Anker in the statement, released on Friday (April 29).

The couple were in Nepal when they heard the news, overseeing the construction of a new building for the Khumbu Climbing Centre which trains local mountain workers.

The centre was established in 2003 in memory of Lowe, who had climbed Everest twice and had strong ties with Nepal.

He ranked among the world's top mountaineers before his death, and was nicknamed the Lung With Legs after a high-speed ascent of Argentina's Aconcagua, the tallest peak in the Americas.

Climbers David Goettler and Ueli Steck discovered the bodies as they were acclimatising for an ascent on the south face of Shisha Pangma.

The mountain, which was closed to westerners until 1978, is considered relatively accessible among the 8,000m peaks.

Many expedition organisers recommend that climbers attempt it as part of their training before turning their attention to higher mountains.