When Beijing introduced price caps for almost two-thirds of apartments in late 2016 as part of a programme to provide homes for millions of middle-class citizens to buy, an array of cheap condominiums began springing up on the city's outskirts.

Three years on, the cramped, poor-quality units that are far from anywhere lie mostly empty.

It's an awkward reality confronting authorities in the nation's sprawling capital, which introduced the stringent housing curbs to quash prices that had shot up almost 30 per cent in the 12 months through September 2016.

Since then, around 60 per cent of land plots sold to developers in Beijing have come with strings attached.

The apartments, once completed, mustn't be sold above a certain price and 70 per cent of units have to be smaller than 90 square metres (about one-third the size of a tennis court). Buyers are also banned from flipping properties within eight years.

Few policymakers globally are armed with the tools to make such granular decisions.

As cities around the world - from Sydney to Singapore, Berlin to New York - struggle to make housing affordable, especially for lower- and middle-income buyers, a range of remedies is being tried. 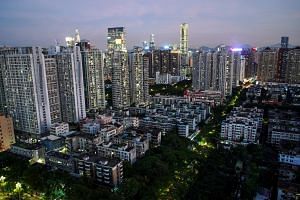 China's buildings are watching how people shop, cook and live

China's government, by contrast, has a vast array of levers to pull, making its miscalculation in Beijing all the more uncomfortable.

The limited-price policy was also the first time in the nation's 30-year housing market history (property ownership was legalised only in 1998) that the authorities sought to control the cost of apartments before they had even been built.

"How slow these projects have been selling has come as a shock to everyone," said Zhang Dawei, a Beijing-based research director at property consultancy firm Centaline Group.

In late 2016, the average home in Mentougou in western Beijing, a two-hour drive from The Forbidden City at the city's heart, cost almost twice that of a home in New Jersey's Jersey City on a per square foot basis.

More affordable apartments - about 20 per cent cheaper - should sell like hotcakes, developers and officials thought.

When the first condominiums under the programme started to come to market in mid-2018, some project owners didn't even bother with showrooms, believing demand would be so strong, the apartments would sell themselves.

There was an initial rush but before long, interest tapered off. Buyers baulked at the quality - some units were delivered with cement-clad walls, leaving purchasers to do the tiling, and occasionally even the electrical wiring, themselves.

Many are also on the outskirts of Beijing, with the nearest metro line 3km away, a struggle for young families reliant on public transport.

In total, China Index Holdings estimates around 51,000 units have been released in Beijing under the programme; as of mid-December, 46 per cent had been sold.

That has turned an undersupply in the capital's new-home market into an oversupply. While once there were at least two bidders for every apartment, now there are two apartments for every one buyer, Guo Yi, the head of research at Beijing-based property consulting firm, United Harvest, said.

The problem has been replicated in other centres too. Shenzhen, Hangzhou and Changsha have adopted similar programmes to limit maximum selling prices.

Wang, who declined to give his first name for fear of reprisal from the developer, is one unhappy buyer.

"I used to feel lucky, thinking I could upgrade my living circumstances with fewer costs," said Wang. "But some things, like the windows, make me feel it's public housing for the poor."

In an attempt to shift the unsold apartments, discounts are starting to emerge.

In the city's south-eastern Hexi district, more than one hour by car from the centre, six limited-price projects compete in a small area. One by one, developers have started to cut costs, leading to a "crazy price war", according to a sales executive for one of the projects. He estimates prices have come down by as much as 10 per cent in some instances.

And for many developers, the land wasn't cheap to start with. Builders have had to squeeze construction costs to compensate, Centaline's Zhang said. He estimates around 80 per cent of firms will face a loss on the projects.

For developers, "this is quite a tough situation", said Huang Yu, a research director at China Index Holdings.

Seven home builders contacted by Bloomberg declined to comment for this story.

Municipal officials also are becoming anxious. At a project in Qinglong Lake to the west of Beijing, developers have been requested by government authorities not to lower prices any further, said another mid-level developer executive, who asked not to be identified.

To be sure, Beijing's plan to make housing more affordable for its some nine million middle-class residents has met with some success.

On a chilly winter night, Chen strolled with his three-year-old son outside Beijing Yinghai and pointed out an as-yet-unfinished apartment to the little boy with excitement. Chen comes regularly to check on the progress of his unit from the outside. It has all the issues Wang complained of, small windows, a hulking substation nearby, but Chen isn't bothered.

"I don't mind these little flaws," he said. "If it was an apartment without a price limit, I would never have been able to buy it."