PYONGYANG (AFP) - Not many schools have classrooms equipped with tanks, jet fighter simulators, and grenade launchers. But North Korea's Mangyongdae Revolutionary School for boys is no ordinary establishment.

Originally set up by the North's founder Kim Il Sung to educate the orphans of those killed in the fight against Japanese colonial rule, it has evolved to become the country's top school, and one of the institutions that knits the ruling elite together.

A bronze statue of Mr Kim and his son and successor Kim Jong Il - an old boy - embracing pupils overlooks the playing field, and the corridors are lined with weapons identification posters.

One room is crammed with small arms, another holds a tank with moving caterpillar tracks, and shooting is a key subject, with training taking place on an electronic range.

The 1,000 shaven-headed boys wear a military-style uniform said to have been designed by the senior Mr Kim's wife Kang Pan Sok, a red line down their trousers symbolising their devotion to the cause of revolution.

After graduating they will all go into the military, a key part of the nuclear-armed North Korean state - Mr Kim Jong Il espoused a "military first" philosophy and current leader Kim Jong Un, the third of the dynasty to rule, regularly appears flanked by officers on one side and officials on the other.

There are six 45-minute classes a day, with half the curriculum devoted to politics and ideology, almost a quarter on military subjects, and the rest for traditional academic disciplines. 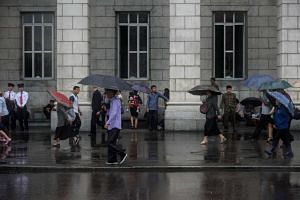 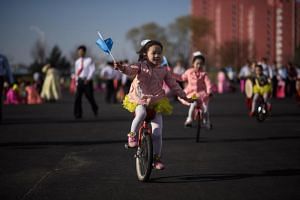 Afternoons are reserved for physical activities, with the boys screaming shouts of encouragement in the weights room of the well-equipped gym or performing impressive topless taekwondo tumbles.

They also regularly clean and maintain the nearby estate where Mr Kim Il Sung was born, now a major pilgrimage site and the origin of the school's name.

A separate girls' school named after Madam Kang stands in the Pyongyang suburb of Chilgol, where she was born.

The schools are a Kim family project: the North's founder visited 118 times, his wife 62 times, their son 94 times, and Mr Kim Jong Un - who was educated in Switzerland himself - has been six times so far.

With the Japanese colonial period now decades in the past, entry to the school has been broadened to those who have at least one parent or grandparent deemed to have been a loyal servant of the state.

"We choose the sons and daughters of the patriots who fought for the party and government and country and fatherland and people," said Senior Colonel Kim Yong Ho, the school's deputy education department director.

The resulting networks of friendships and influence can last a lifetime. As well as Mr Kim Jong Il, the school's graduates include Mr Yon Hyong Muk, the North's premier in 1988-92.

Well beyond the Kim family, the top echelons of North Korean society are a self-perpetuating ruling class.

"The North Korean elite is remarkably closed to outsiders, it is hereditary to a degree which would be inconceivable in any other communist country," said Dr Andrei Lankov of Korea Risk Group.

Pyongyang proclaims its citizens as equals but classifies them by socio-political background according to a detailed and hereditary system known as songbun, with loyalty to the authorities a crucial factor - those whose ancestors were capitalists or collaborated with the Japanese rank low.

Only those with good songbun can expect to secure a place at a top university or permission to live in Pyongyang, although the advent of private business is now opening up opportunities for others.

When the Mangyongdae Revolutionary School was founded in the early days of the Democratic People's Republic, it copied the Soviet Union's Suvorov military schools for veterans' orphans.

At the time there were four main factions in the ruling Workers' Party - the partisans who had fought alongside Mr Kim Il Sung, domestic Communists, those who had been exiled in China, and Soviet Koreans.

"Then the function of the school changed," said Dr Lankov, attributing its prominence to "the militarisation of North Korean society in the 1960s and emergence of the quasi-religious cults of the guerrillas who are essentially presented as apostles to Kim the Great".

Even so, its appeal may be waning for the next generation, he added.

"The great-grandchildren of tough and rustic guerrillas have grown spoiled and do not appreciate the tough and simple values of their forebears," he said.

"They would prefer study foreign languages and computer programming, rather than handguns and ways of killing a human with only a short knife."

But Senior Colonel Kim has no doubts. "We have to educate our schoolboys as the hard core of the Korean People's Army," he said.