At a dinner on Tuesday (Jan 22) on the sidelines of the World Economic Forum in Davos, Xiao Yaqing, chairman of the State-owned Assets Supervision and Administration Commission (SASAC), met chief executives of prominent Chinese and international companies.

The move was part of a broader Chinese charm offensive this year in Davos, the highlight of which will be a speech on Wednesday by Vice-President Wang Qishan.

With another top Chinese official, Liu He, due to visit Washington for trade talks next week, the efforts are aimed at securing the backing of the international business community for ending the US-China trade war. The dispute is one of the biggest threats looming over the global economy.

Both sides talked about the need for greater cooperation and agreed that more communication is required for people to understand China, said the people, speaking on condition of anonymity. 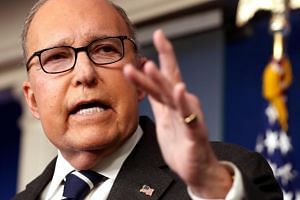 But foreign executives also raised concerns about China's treatment of intellectual property, the ownership structure of state-owned enterprises, and the Made in China 2025 policy to lead the world in industries such as artificial intelligence and robotics.

Those issues are the heart of the Trump administration's complaints about China, which have led the US to impose tariffs on some US$250 billion of imports from the nation.

"It's a great gathering," SASAC's Xiao said in a separate interview. "Foreign executives expressed their concerns on some uncertainties such as the economic slowdown. To us, that's not a major issue because today's China can no longer grow at a rate of 9 to 10 per cent."

Trade wars and the outlook for China are major themes in Davos this week. Delegates have largely predicted that the global economy can avoid a recession even as its expansion slows.

"Part of the uncertainty and instability that we have right now is that what happens between the US and China is so significant to economic growth," said Carlos Pascual, senior vice-president of global energy at IHS Markit and US ambassador to Mexico under president Barack Obama.

Carrie Lam, Hong Kong's Chief Executive, told Bloomberg Television on Tuesday that she's not very optimistic the US and China can reach a lasting trade deal before their three-month truce expires on March 1.

During recent discussions she held with US officials and business leaders, it became clear to Lam that fundamental issues beyond the American trade deficit with China still need to be overcome. She said she doubts they can be addressed in a short period.

The US insists that China undertake significant "structural" reforms to its intellectual property regime and remove the equity caps that limit foreign ownership of many international companies' Chinese ventures.

It also wants China to buy more US agricultural and energy exports to reduce what the Trump administration sees as an unfair trade imbalance.