BEIJING - The handshake between US President Donald Trump and North Korean leader Kim Jong Un in Singapore's sunny Sentosa island on Tuesday (June 12) was a simple but history-making moment, that was beamed live to viewers by media outlets all across Asia.

Many hailed it as the first step on the road towards a denuclearised and peaceful Korean Peninsula, calling it a historic opportunity and remarkable achievement.

In China, state news agency Xinhua said in a commentary on Tuesday the road ahead was bound to be a "bumpy one that requires patience and wisdom".

"The first step is always the hardest to take. As Pyongyang and Washington, the two parties at the crux of the peninsula issue, have made bold decisions to hold a summit, it is important that talks keep going and that relevant parties contribute to the negotiating process," said the news agency.

Hong Kong's Ta Kung Pao also called the summit a remarkable achievement, considering the decades of hostilities between both countries.

"Solving the North Korea nuclear issue will not happen in one stroke, but the Trump-Kim summit can be the start of a series of serious talks. We hope the summit will be able to send out positive signals on these issues, and push the peace process on Korean Peninsula to a new level," said the Hong Kong newspaper.

Other Chinese media outlets including state broadcaster CCTV, the People's Daily and China News Service, among others also covered the event live, beaming images of the historic summit to television and computer screens.

The summit is the first time in history that a sitting US president has met North Korea's leader. Mr Kim is Chairman of the State Affairs Commission.

In South Korea, Yonhap news agency said the meeting was a "historic opportunity to peacefully end the North Korean nuclear threat", and that security in Singapore was "watertight", with about 5,000 police and security officers deployed on major roads leading to the Capella Singapore hotel on Sentosa island. 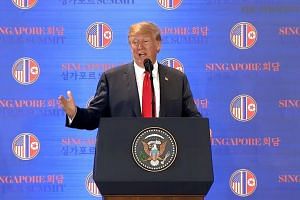 The Korea Times noted that the Trump-Kim meeting was the "first-ever sit-down between the leaders of the Korean War adversaries and the culmination of a months-long flurry of diplomacy."

JoongAng Ilbo, a major Korean-language daily, said "the summit of the century" may possibly "pave the way to a formal end to the 1950-53 Korean War".

In Japan, all domestic news channels on Tuesday - including public broadcaster NHK, as well as TV Asahi and TBS - featured rolling coverage of the summit, cutting to a live broadcast at about 9am local time (8am in Singapore) as the convoys of US President Donald Trump and North Korean leader Kim Jong Un departed their respective hotels for the summit venue, the Capella.

Live footage of the historic handshake between the two leaders - and their initial remarks as they sat down for talks - was also beamed across television screens in Japan.

The Philippine Daily Inquirer also picked up The Straits Times' live broadcast of the summit.

Meanwhile, North Korea's Korean Central News Agency paid special focus to Mr Kim's surprise night-time tour of Singapore on Monday, where he took in some of the island's best sights including Gardens by the Bay and Marina Bay Sands.

The North's media has been providing detailed coverage of its leader's trip in Singapore.

Mr Kim enjoyed great nocturnal views on Monday, it reported, adding that its leader "is going to learn a lot from the good knowledge and experience of Singapore in various fields in the future".