Japan said the move would have a "big impact" on the countries' close bilateral ties, while China said it was "resolutely opposed" to the decision and South Korea said it may file a complaint to the World Trade Organisation, reported Reuters.

Indonesia said it is ready to retaliate if the Trump government embarks on a trade war, reported Antara News.

Trump on Thursday pressed ahead with the imposition of 25 per cent tariffs on steel imports and 10 per cent for aluminium on Thursday, though he announced exemptions for Canada and Mexico, and said exceptions could also be made for other allies.

China, which produces half the world's steel, will assess any damage caused by the US move and "firmly defend its legitimate rights and interests", the country's Ministry of Commerce said.

Trade tensions between China and the United States have risen since Trump took office. China accounts for only a small fraction of US steel imports, but its massive industrial expansion has helped create a global glut of steel that has driven down prices. 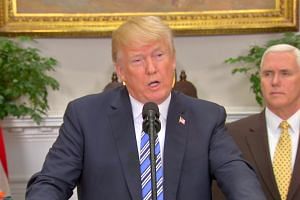 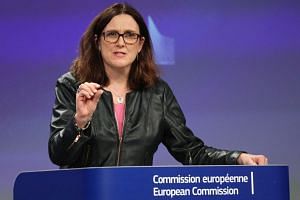 Global reactions to US metal tariffs

China's steel and metals associations urged the government to retaliate against the United States, citing imports ranging from stainless steel to coal, agricultural products and electronics.

"The cost of a trade war will be tremendous and it will make everyone unhappy," Junichi Makino, chief economist at SMBC Nikko Securities in Tokyo, said in a report on Friday.

Trump's declaration coincided with the signing by 11 countries of a new Trans-Pacific trade pact that the United States withdrew from last year.

South Korea and Australia both said they would seek exemptions.

The European Union, Brazil and Argentina said overnight they should not be targeted or would seek exemptions.

Shares of China's steel and aluminium makers fell on Friday morning. Baoshan Iron & Steel was down around 3 per cent, while Hesteel and Beijing Shougang were down less than 1 per cent.

In South Korea, shares of Posco were down more than 2 per cent, while in Tokyo, Japan's biggest steelmaker Nippon Steel & Sumitomo Metal was up slightly.

Meanwhile, Indonesian Vice-President Jusuf Kalla said Indonesia has the option to retaliate against the United States.

"If he (Trump) hinders the entry of our crude palm oil into the US, we will certainly also reduce our soya bean and wheat flour imports from that country. It will be like that. We import soya bean, corn, Boeing aircraft and wheat. How many aircraft have we even bought from there?" he noted at the Institute of Police Science in Jakarta on Thursday.

He said he expected foreign countries to challenge the trade-war policy implemented by Trump.

"This will pose a problem if the war created by Trump spirals out of control. It is highly possible that several countries will retaliate in the agricultural sector, for instance," he said.

Indonesian Finance Minister Sri Mulyani earlier warned of the potential of a trade war if the US government imposes the metal tariffs.

"World history has demonstrated that the impact of a trade war on the global economy would be devastating," she was quoted as saying by Antara.