In its editorial, the paper says that the departure of a former Thai diplomat, from the advisory panel set up by Myanmar leader Aung San Suu Kyi to address the Rohingya issue, dims hopes for any improvement in their plight.

BANGKOK (THE NATION/ASIA NEWS NETWORK) - An advisory panel on which the Myanmar government is counting to guide the country to peace and stability has suffered another major setback with the resignation of member Kobsak Chutikul, a retired Thai diplomat.

Annan's report was released in August last year, and four months later Surakiart Sathirathai, a former foreign minister of Thailand, was appointed to head the advisory panel to help turn Annan's proposals into a reality.

Surakiart's leadership role was soon under a cloud when veteran US diplomat Bill Richardson quit the panel in protest in January.

Richardson expressed doubt that Suu Kyi had the political will to implement Annan's recommendations to their intended extent. "The main reason I am resigning is that this advisory board is a whitewash," Richardson told Reuters at the time.

"Myanmar continues to prove itself both incapable and unwilling to genuinely implement the recommendations of (Annan's) Rakhine Advisory Commission," he asserted.

"Closing the detention camps in central Rakhine state, for example, without addressing freedom of movement, access to services or other fundamental and structural issues, is only likely to increase the depravity facing the hundreds of thousands of Rohingya that remain in Rakhine and create yet more refugees."

Myanmar has in recent months undertaken a couple of superficial actions - signing an agreement with the United Nations agencies for refugees and development and forming a Myanmar-led commission of inquiry to investigate the mass killings that drove some 700,000 Rohingya across the border into Bangladesh. 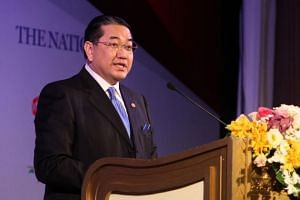 But UN refugees commissioner Zeid Ra'ad al-Hussein has accused Myanmar of trying to cover up a "deliberate attempt by the authorities to destroy evidence of potential international crimes, including possible crimes against humanity" when they bulldozed mass gravesites.

Such accusations are rare, but they have been used in reference to other atrocities elsewhere in the world, including in Bosnia and Sudan and the Islamic State slaughter of Yazidi communities in Iraq and Syria.

Surakiart can't say he wasn't warned about what he was getting into with his advisory committee.

He was making a big leap of faith. Members of the Asian Peace and Reconciliation Council, a non-governmental organisation made up of distinguished former national leaders from around the globe, launched in Bangkok in September 2012, refused to endorse the initiative.

They were concerned that Myanmar would use their names to whitewash its role in alleged crimes against humanity.

Perhaps Surakiart should think about quitting, too, before he gets caught up in the illusion that he is actually contributing positively to the cause.

Throwing the towel doesn't have to mean walking away from a grave responsibility - the moral obligation that the international community has regarding the Rohingya people.

It would be wise for everyone, all nations, to throw their support behind UN special envoy Christine Schraner Burgener, whom Kobsak believes, in his words, "offers the best hope in the circumstances".

There is no reason for Surakiart to take the events currently unfolding personally.

After all, the issue is not about him or his career or reputation.

It's about the Rohingya, one of the world's most persecuted people.

The Nation is a member of The Straits Times media partner Asia News Network, an alliance of 23 news media entities.