TOKYO (YOMIURI SHIMBUN/ASIA NEWS NETWORK) - The revelation that Tokyo Medical University has for years deliberately reduced the scores of women who took its general entrance exam has sparked anger and bewilderment among female doctors, students at the university and test-takers.

There likely will be widening repercussions over the manipulation of exam scores for the university's school of medicine.

"I feel like the efforts and aspirations of female doctors have been trampled on," said a 38-year-old physician working in the internal medicine department of a hospital affiliated with the medical department of a public university in the Kanto region.

According to sources related to the issue, Tokyo Medical University tried to keep the proportion of successful female applicants at about 30 per cent through such methods as uniformly lowering the scores of women taking its entrance exam. The examinees were not informed of this practice.

"Many female doctors don't return to work after they get married or take time off to have a child," a source at the university said.

"We wanted to increase the number of men so hospitals could secure enough doctors on the front line."

The female doctor could not hide her frustration at the university's treatment of female applicants.

"Women are also suited to providing medical care. We show compassion to patients while treating them with meticulous care," she said. "Depriving someone of the chance (to be a doctor) just because of their sex doesn't benefit anyone."

Atsushi Hiraide, a professor at Kindai University's faculty of medicine and an expert on medical education, said: "Decisions on which borderline examinees are accepted may reflect university policies. However, uniformly lowering the scores of female examinees only is absurd, and it's a betrayal of the test-takers.

"As the government ministry with authority on this issue, the Education, Culture, Sports, Science and Technology Ministry must examine whether other universities are doing something similar."

Said a 20-year-old female student from Fukushima city: "I cannot accept that it's difficult for us to pass the exams only because we are female."

One of her parents is a doctor, and she has failed to pass the entrance exams of medical schools including Tokyo Medical University and Jikei University for two straight years.

"I will have to decide which university to try to get into. But it discourages me from studying," she added angrily.

In Chiba Prefecture, a 19-year-old female student who failed to pass this year's first-stage entrance exams for medical schools including Tokyo Medical University and Jikei University decided to take the exams again next year. 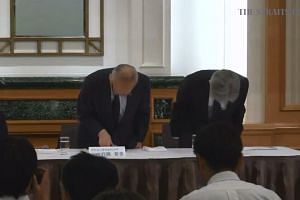 "It seems true that female doctors tend to quit their jobs, but I think it is doctors' style of working that should be changed," she said.

A 24-year-old male student in his sixth year at Tokyo Medical University's medical school felt guilty as he thought about the female students who were made to fail through their exam scores being manipulated, in spite of their being excellent.

He said, "I want the university to investigate the manipulation of scores in detail and explain the outcome without hiding anything."

Even before this issue was revealed, the ministry had demanded that the university investigate whether entrance exams for the past six years were conducted fairly or not and report the outcome of the investigation to the ministry.

"Unfair discrimination is unacceptable. We will plan some course of action for the university, depending on the content of its report," a ministry official in charge of university entrance examinations said.

The university will announce the result of the investigation as early as next week.