TOKYO (BLOOMBERG) - An opponent of the construction of a new US Marine base on the southern Japanese island of Okinawa won election as governor on Sunday (Sept 30), beating a candidate backed by Japanese Prime Minister Shinzo Abe's ruling coalition.

Mr Denny Tamaki, the son of a US serviceman and a Japanese mother, claimed victory over Mr Atsushi Sakima in the closely fought race, Kyodo news agency reported.

Mr Tamaki opposes a government plan to build a new military facility, enabling the closure of the Futenma Marine base in the centre of a densely populated city.

National broadcaster NHK showed a beaming Mr Tamaki wearing a traditional floral shirt and dancing alongside his supporters as the results came in.

"What the Okinawan people cannot accept is the construction of the base at Henoko," he said, referring to the new facility. "I will urge the government to go along with the feelings of the people."

While media opinion polls had indicated the result might be close, Mr Tamaki won 396,632 votes, compared with 316,458 for Mr Sakima, who was supported by Mr Abe's ruling coalition, according to NHK.

Many in Okinawa, which hosts about half of the 50,000 US military personnel in Japan, want the base moved off the island, or even out of the country. Local residents have complained of crime, noise, pollution, and accidents associated with US bases, and protests have hampered construction at the new site for 20 years. 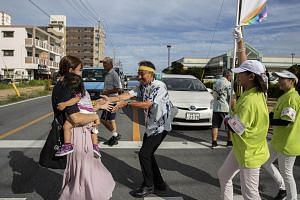 Japan, whose own military is restricted by a pacifist Constitution, relies heavily on the US for security in a region that includes China and North Korea. Mr Abe's ruling Liberal Democratic Party sees the delay to the base project as a risk to the alliance.

The result deals Mr Abe an early setback less then two weeks after he won a third straight three-year term as LDP leader.

While Mr Abe is a step closer to becoming the country's longest-ever serving Premier, he must juggle trade tensions with US President Donald Trump and an ambitious agenda to push through a number of contentious economic reforms.