WASHINGTON - The US and Japan agreed to intensify trade consultations between the two allies, with an aim to expand investment and trade between the world's first and third largest economies,  leaders of the two countries said at a joint press conference on Wednesday (April 18).

President Donald Trump and Prime  Minister Shinzo Abe were also in agreement on dealing with North Korea, with Mr Trump saying that he was looking forward to a summit with North Korean leader Kim Jong Un but would “respectfully” walk out of it if it looked like being unfruitful.

On the issue of rejoining the Trans-Pacific Trade Partnership (TPP), Mr Trump said: “Unless they offer us a deal we cannot refuse, I will not go back to TPP.”

“I much prefer bilateral deals… I am negotiating a one-on-one deal with Japan,” he said.

The TPP, whose signatories include Japan  and Singapore, has since become the 11-nation Comprehensive and Progressive Agreement for Trans-Pacific Partnership (CPTPP)  after Mr Trump pulled the US out of the pact shortly after taking office.

Speaking at his Mar-a-Lago estate in Florida on Wednesday at the end of a two-day summit,  Mr Trump said the US had a “massive trade deficit with Japan, anything from 69 to 100 billion Dollars a year, that’s massive”. He added: “We will work closely on trade, we will be consulting on how to deal with the imbalance.”

While the US side has been pushing for a bilateral trade deal with Japan, the Japanese side remains non-committal.

"So on the US side, that they are interested in a bilateral deal, we are aware of that. But at any rate, our country’s position is that TPP is the best for both of the countries. And based on that position, we shall be dealing with the talks," said Mr Abe, adding that both sides have agreed to start talks for" free, fair, and reciprocal trade deals".

He added that Japan would continue to “respond” to tariffs on steel and aluminium imposed by the US on national security grounds, which Japan, unlike other US allies, was not exempted from.

Asked about the tariffs, Mr Trump said: “I would look forward to some time in the future to taking them off.”

The working lunch earlier in the day - after a round of golf by Mr Trump and Mr Abe - was largely about trade issues, with both leaders’ full delegations present. 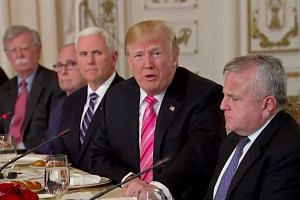 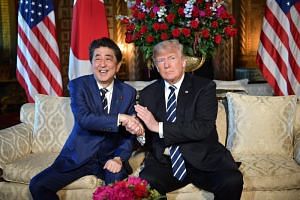 However, on the topic of  Mr Trump’s summit with Mr Kim, Mr Trump assured Mr Abe that he would raise the issue of Japanese abductees when he meets the North Korean leader.

“We’re with you,” he told Mr Abe. “You’re a lot closer (to North Korea) than we are, but we’re working on this together.”

He said he and Mr Trump  are in full agreement on complete, irreversible and verifiable denuclearisation  in North Korea.

“Just because North Korea is responding… there should be no reward; maximum pressure should be maintained,” Mr Abe said.

President Trump added that he was looking forward to meeting Mr Kim, but if the meeting was not going to be a success it would not take place.

“If the meeting while I’m there is not fruitful, I will respectfully leave the meeting,” he said.

But at the working lunch with Mr Abe earlier, Mr Trump said Central Intelligence Agency CIA director Mike Pompeo had a great meeting with Kim Jong Un and got along with him “really well, really great”.

Mr Trump and Mr Abe will have dinner again together with their wives before Mr  Abe leaves for Japan on Thursday morning (US time).