In their article, the writers call for further cooperation between China and Russia to develop the potential of the Arctic.

BEIJING (CHINA DAILY/ASIA NEWS NETWORK) - The Arctic matters and, being a "near-Arctic state", China is fully engaged in its affairs.

China, by the way, is an Arctic Council observer.

The Arctic is of crucial importance, among other things, for the environment, trade, investment, energy and security. It is estimated to have a quarter of the world's oil and natural gas.

China has a clear Arctic policy, which was explained in a White Paper issued in January 2018, which ties in well with the concept of a "Polar Silk Road".

Thanks to global warming, Arctic ice is melting, opening up the possibility of a "Northern shipping route" via the Northwest, Central and Northeast passages.

Shipping time between China and Europe via the Arctic would be shorter than the existing one through the Indian Ocean and Suez Canal.

Although this does not mean the "Northern route" would replace the established ones, it would represent a new opportunity, particularly in the trade of energy and minerals.

The thinly populated island-state of Iceland, for instance, is rich in clean energy, a fact which has drawn China's attention. 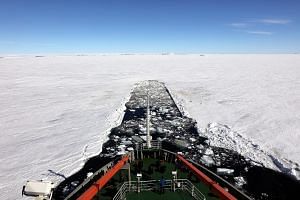 In 2018, Sinopec Green Energy signed a deal with Iceland's Arctic Green Energy (apparently the biggest deal in Iceland's history) to supply to China geothermic energy, which is clean and helps reduce pollution.

China and Iceland have been parties to a Free Trade Agreement since 2013, and negotiations are ongoing on a similar accord between China and Norway, a country rich in energy as well as in fisheries. On the North Atlantic's other side, Canada is rich in minerals and could welcome Chinese investments－also as a way to balance US regional hegemony.

Research and exploration in the Arctic are fundamental to understanding and tackling climate change issues.

With the melting of Arctic ice, the polar region could provide an opportunity to better understand the effects of global warming. At the same time, the polar region－particularly the Russian part of the Arctic－has a huge reserve of energy, which should be extracted according to international environmental law.

The region of Yamalo-Nenets in Western Siberia is home to slightly more than half a million people, but it has about 90 percent of Russia's gas and a substantial share of its oil reserves.

More oil and gas are available further North, in offshore fields. According to US estimates, 30 percent of the world's undiscovered gas and 13 percent of its oil could be found in the Arctic region.

Considering the Western sanctions against Russia, therefore, Beijing is in an ideal position to further strengthen its partnership with Moscow in this field.

The Yamal Liquefied Natural Gas plant is a huge infrastructure project on the mouth the Ob River in Northwestern Siberia, where winter temperatures drop to minus 50 degrees Celsius.

Yet gas from Yamal is liquefied and can reach Chinese ports in about two weeks, half the time required to ship gas from the Middle East via the Suez Canal to China.

Novatek is giving healthy competition to Gazprom, the dominant market player, and it specialises in extracting fuels in the Yamal region.

Talks are on to build "Yamal Arctic LNG 2", a second giant plant. And CNPC is one of the partners of the proposed project, which has attracted the attention of major global energy companies such as Total, Mitsubishi and Saudi Aramco, which in February 2018 signed a memorandum of collaboration with Novatek.

In other words, while Russia is looking for new opportunities to further expand its role as an energy supplier, the resources in its part of the Arctic are somewhat reshaping Eurasia's economies and geopolitics.

On the other hand, Chinese companies are investing in Greenland, which is home to minerals such as uranium and rare earths. In 2016, Shenghe Resources, a Chinese company, bought 12.5 percent stake in the Kvanefjeld rare earth project－and more opportunities are emerging.

The importance of the Arctic for energy is growing. Russia and China have stepped up their cooperation. But the US has not attached much importance to polar issues.

Ernesto Gallo is an honorary research associate at University College London, and Giovanni Biava is an energy and gas consultant at Exelen group. China Daily is a member of The Straits Times media partner Asia News Network, an alliance of 23 news media organisations.