BEIJING (AFP) - A decade after Beijing hosted the 2008 Olympics, its legacy remains unmistakable from the smallest alleyways in the Chinese capital to the country's growing clout abroad.

For better or worse, the Games changed the face of Beijing: from the iconic Bird's Nest stadium to the countless blocks of ancient homes bulldozed in an Olympic building frenzy.

Efforts to clear the city's notoriously smoggy air and choking traffic, however, have been less successful.

Abroad, Beijing used the games to send a message: decades of reform and growth had made China rich and powerful enough to spend billions staging a dazzling and deftly organised sports spectacle.

The opening ceremony on 8/8/2008 - the number eight is considered auspicious in Chinese culture - amazed the world with its flawless choreography and sheer ambition, and national pride was further super-charged by China's domination of the Games' gold medal count.

"The successful Beijing Olympics helped to boost the self-confidence of the Chinese leadership - and people - that the country could go on to even greater strengths," said Brian Bridges, an expert on sport and politics at Hong Kong's Lingnan University.

But those who hoped the Games would lead to positive political change in China have largely been disappointed, said Zhouxiang Lu, an expert on the intersection of sports and politics at Ireland's Maynooth University.

"Many of the arguments in favour of giving China the Games were that maybe they would adopt the Western system and there would be some change within the Chinese Communist Party," he said.

Some expressed hope the Olympics might nudge China towards democracy, and activists seized the opportunity to pressure authorities on issues like press freedom and human rights, including Beijing's tough policies in restive areas like Tibet.

"The Beijing Olympics was a milestone event, along with China's entry into the World Trade Organisation (in 2001), in embracing the world both economically and culturally," Lu said.

But "they've had less effect from a political perspective".

A decade later, Communist control is more concentrated than at any time since the era of Mao Zedong.

Censorship has tightened dramatically, activists are routinely jailed or under pressure, and China's treatment of ethnic minorities has deteriorated drastically, including mass detentions of the mostly Muslim Uighur minority in the far-western Xinjiang region.

Instead of changing its ways, Beijing instead countered the criticism by investing more in external public relations, according to Susan Brownell, an expert on the Olympics at the University of Missouri-St. Louis.

After the Games, one of the "huge changes was communications. Particularly the effort to communicate with the outside world", she said, part of a wide-ranging effort to increase Chinese soft power.

One positive outcome of this change was that China permanently removed travel and interview restrictions on foreign press that had been eased ahead of the Games, although foreign media still face tough conditions to report in the country.

However, Brownell said "the pressure on Beijing really wasn't 'you have to communicate better.' The pressure had to do with other things. So, the result wasn't in the realm that critics wanted." . 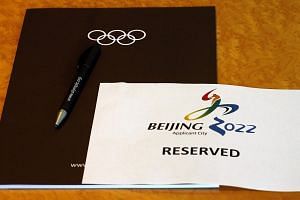 Beijing spends big as it prepares for 2022 Winter Olympics

Regardless of the criticisms, the Chinese government seems to have concluded the Games were a good investment. So good that they bid for and won the right to host the Winter Olympics in 2022.

Beijing will host the Olympics again, using some of the facilities it built for 2008, as it becomes the first city ever to stage both the summer and winter Games.

Critics of the government have already begun planning how to use the showcase event to push for change.

But this time around, they will be facing off against a much more sophisticated government that will have anticipated criticism and will likely take a more low-key, more sports-oriented and less political approach to the games, Maynooth University's Lu said.

"Beijing has learned its lesson. It is an opportunity to promote their image, but at the same time, other people will also use that opportunity," he said.

Brownell expects that this time around, the Games will be more "relaxed and not so tightly controlled".