TOKYO - In a rare instance of rampage in Japan, a 21-year-old man in a rented car deliberately ploughed into pedestrians on a famous Tokyo street, which was closed to vehicles for the New Year, injuring nine people.

Kazuhiro Kusakabe, who was arrested for attempted murder, confessed to having the intent to kill when he rammed his car through Harajuku's Takeshita Street at 12.10am on Tuesday (Jan 1) (11.10pm on Monday, Singapore time), said the Tokyo Metropolitan Police.

At first, Kusakabe claimed that he wanted to commit "an act of terror" but later said he was "acting in retaliation of the death penalty system". He also said there was no need for him "to make any excuses for his action".

Kusakabe, whose occupation is unknown, knocked down eight men aged between 19 and 51 as he drove through about a third of the 350m street, which was closed to vehicular traffic at the time. He came to a stop when he crashed the rented vehicle into a building. The vehicle bore an Osaka licence plate.

One of those injured, a 19-year-old undergraduate, remains unconscious in critical condition in hospital. Four others suffered severe injuries such as fractures and head injuries, while the remaining three suffered minor bruises.

The ninth victim, a 19-year-old man, was assaulted by Kusakabe after he fled on foot. He was arrested 20 minutes later at the nearby Yoyogi Park.

Takeshita Street, regarded as the epicentre of Tokyo's eccentric youth culture, was closed to all vehicles from 10pm on Monday to 5am Tuesday, as heavy foot traffic was expected to and from the nearby Meiji Jingu, a major shrine where Japanese pray for good luck in the new year. 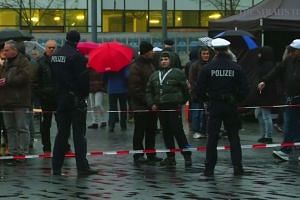 Kusakabe reportedly told the police that he planned to attack at the Meiji Shrine, but had been deterred by massive road blocks in the area.

A tank with 20 litres of kerosene was also found inside the rented car, which he said was intended to be used to set the vehicle ablaze after the rampage.

Narrow Takeshita Street is typically bustling with tourists during the day but the crowd was relatively sparse when Kusakabe drove through it, local media reported.

One eyewitness told public broadcaster NHK of witnessing a "ghastly scene" with people collapsing on the street. Another passer-by spoke of a lucky escape, saying: "It scares me knowing that I'd have been hit if the attack was to have happened five minutes later."

It remains unclear if Kusakabe's intent was to make a statement against the death penalty in general, or if he was targeting any particular execution.

Japan executed a total of 15 prisoners last year, a joint record high for the number with 2008. Most of those executed, or 13, were cultists of the Aum Shinrikyo group that was responsible for the 1995 sarin gas attack on the Tokyo Metro during morning rush hour, which killed 13 and sickened thousands of others. The remaining two were hanged last week for the fraud, kidnap and murder of the president and an employee of an Osaka investment company in 1988.

Another 110 inmates are currently on death row, with 86 of them seeking a retrial.

The Mainichi daily cited investigative sources as saying that they were looking into any connection between Kusakabe and the Aum Shinrikyo cult.

It is customary for the Japanese to ring in the New Year with their families and to visit shrines to pray for good luck and fortune in the year ahead. The Shibuya Scramble Crossing has also become a major gathering point for revellers.

About 120,000 people rang in the New Year under the watch of riot police but there were no reports of any other major incidents.