The suspension of all public transport in and out of the central Chinese city of Wuhan has turned the spotlight on the historic city that has become ground zero of the new coronavirus outbreak. The Straits Times' former China correspondent Lim Yan Liang takes you through some things to know about this rising city that is the capital of Hubei province.

PART OF THE 'NEW FIRST TIER'

The most populous of the cities in central China with 11 million people, Wuhan is widely seen as the economic and financial hub of the middle reaches of the mainland.

The city has consistently made the "new first tier" list of China's metropolises outside of the traditional four (Beijing, Shanghai, Guangzhou and Shenzhen) since Chinese media began to use the term in 2013.

Long an industrial base and manufacturing city, Wuhan has in recent years been remaking itself to attract high-tech firms. Foxconn, a key Apple supplier, has a plant there.

The authorities' move to lock down Wuhan to try and contain the new virus is partly due to the city's strategic location. Wuhan's position on the confluence of the Yangtze River and the Han River means it has long been a key transport node linking the rest of China through railways and expressways, and the city is sometimes referred to as the "Chicago of China".

For instance, with the rise of high-speed rail (HSR) in China over the last decade, Wuhan is now a key intersection for two major HSR lines: the north-south Wuhan-Guangzhou line, and the east-west Shanghai-Wuhan-Chengdu line. 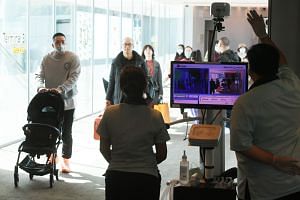 Wuhan virus: How global airlines are responding as the outbreak spreads

Known as one of the "four furnaces" of China, temperatures in Wuhan can soar to more than 40 deg C in summer. The oppressive humidity from being by the Yangtze River also leads to many of its residents leaving in droves in the hotter months from June to August to bishu (avoid the heat).

Come spring and autumn, tourists are drawn to Wuhan to visit landmarks such as the pagoda-like Yellow Crane Tower, immortalised in Tang dynasty poet Cui Hao's poem about a sage departing on the back of a yellow crane, one of the famous Three Hundred Tang Poems.

Wuhan also boasts the 350-year-old Guiyuan Temple that harkens back to the Qing dynasty, and the Hubei Provincial Museum, among the finest of China's public museums.

Like its weather, Wuhan is known for its spicy foods, such as shaokao, or barbecued skewered meat, and ganremian - hot-and-dry noodles coated in chilli oil and soya sauce. It is also one of the homes of the mala xiang guo, a soup-less, spicy version of the hotpot with gratuitous use of chillies and peppercorns. The city is also known for its open-air food streets, featuring stalls selling a variety of seafood, cooked meats and other street eats, served alongside easy-drinking Chinese beer.

Wuhan residents' love of exotic meats is one possible reason for the new virus outbreak: The wholesale market where the virus was first discovered was found to have sold a variety of live animals meant for the dinner table, such as crocodile, hedgehog and deer.

A little-known point is that Wuhan is the world's largest college town, boasting 53 universities, including the prestigious Wuhan University that alone accounts for some 60,000 students.

The hundreds of thousands of university students the city plays host to means that the start of each new semester in February and September sees a wave of mass migration, with traffic volume in neighbourhoods around schools swelling by more than 15 per cent.

Wuhan University is also a popular tourist destination. Situated on the picturesque Luojia hill, it commands a panoramic view of the city's East Lake scenic area. Many also flock to the campus in March and April to enjoy the cherry blossoms.

Concerts in Wuhan postponed due to virus outbreak

Fans of Chinese history are also drawn to Wuhan for its pivotal role throughout China's epochs. Wuhan can trace its history back to the Bronze Age and the Erligang, a civilisation that existed between 1510BC and 1460BC. Part of the city was an important port during the Han dynasty, while during the Qing dynasty, it rose to become one of China's top four merchant towns.

Echoes of that period remain in Wuhan. France, which obtained a concession in the city under the Qing, has more than 100 firms invested in Wuhan today. For instance, Renault has several plants in the area, while Peugeot-Citroen has a joint-venture project there.

Wuhan is also the birthplace of the Nationalist Era as the home of the Xinhai Revolution of 1911, and the Wuchang Uprising that led to the downfall of the Qing dynasty and the end of Imperial China.

The city is also the site of the 715 Incident, a purge of communists that led to the collapse of the alliance between the Kuomintang and the Chinese Communist Party.

A version of this article appeared in the print edition of The Straits Times on January 24, 2020, with the headline '6 things to know about Wuhan'. Subscribe
Topics:
More
Whatsapp Linkedin FB Messenger Telegram Reddit WeChat Pinterest Print Purchase Article Copy permalink