The massive quake that rocked China's south-western province of Sichuan on the afternoon of May 12, 2008, left about 10,000 children dead, many buried under rubble when their schools collapsed.

With almost 5 million people homeless and facing a public backlash in the aftermath of the quake, China has since invested heavily to transform the way it prepares and responds to earthquakes, according to disaster experts.

China has "taken very strong measures to ensure that the loss of life and economic losses would not be the same in a future earthquake," she told the Thomson Reuters Foundation.

Although China is the most earthquake-prone nation in Asia, other countries in the region - like the Philippines, Myanmar, Nepal, India, Indonesia and Japan - face similar threats.

Many of them are also experiencing unprecedented urbanisation, which experts say makes it vital that they improve their disaster preparedness and response capabilities. 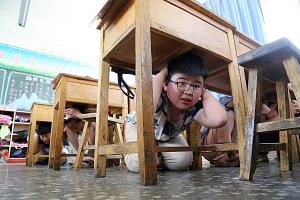 "More and more people are living in hazard-prone areas or assets built along fault lines, which increases the risk," said Arghya Sinha Roy, a disaster risk specialist at the Asian Development Bank (ADB) in Manila.

Over the last 50 years, China has experienced an average of three earthquakes per year, leaving 380,000 people dead and affecting more than 75 million people, according to the UNISDR.

In addition to the loss of lives and livelihoods, the UN agency estimates that the average annual cost due to future earthquakes in China will be about US$7 billion.

Given that the Sichuan quake destroyed an estimated 1.5 million homes and 7,000 classrooms, two of the most critical steps China has since taken were to strictly enforce building codes and improve safety at schools, said UNISDR's Girardet.

"The big cause of death and destruction in the Sichuan earthquake was the collapse of buildings that had been quite shabbily constructed," she said.

As well as retrofitting and rebuilding many schools in quake-prone areas, China is educating children about the risks and hazards relating to quakes and what to do in a disaster.

In addition to regular school drills, Beijing has pledged more than $31 million over the next five years to develop seismic science and technology.

The initiative pairs more developed provinces and cities with disaster-prone areas so that they can provide assistance, expertise and financial support before and after disasters.

The speed and efficiency of Chinese authorities in post-quake reconstruction efforts has also been critical in limiting the impact on economic growth and on people's lives, said Saini, who advises the government when disasters happen.

China also now has 700,000 people trained as disaster reporters, who can quickly collect information for regional and central governments on the impact of an earthquake.

A new emergency management ministry was inaugurated last month, which helps coordinate efforts to reduce risks rather than having them spread over several government ministries and departments.

"They have attempted to bring all these together under a central authority and this will allow them to both look at prevention and response to disasters in a more cohesive manner," said Girardet.

Asia-Pacific is the most disaster-prone region in the world, according to the UN Economic and Social Commission for Asia and the Pacific (UNESCAP).

Earthquakes and tsunamis have been catastrophic, including the 1976 Tangshan earthquake in China, the 2004 Indian Ocean tsunami, Japan's 2011 tsunami, and the 2015 earthquake in Nepal.

"Far more investment is required in this area across the board," said Girardet. "The colliding impact of climate change, urbanisation, ongoing poverty and inequality in the region, all mean that the risks are ever-growing."

Retrofitting buildings to make them safer when quakes strike is expensive, but that should not deter the authorities from making a start, said Jolanta Kryspin-Watson, a disaster risk specialist at the World Bank in Singapore.

Building regulations should be updated and then enforced to ensure that new infrastructure and buildings are more resilient to earthquakes, disaster experts said.

Students and teachers should be educated about quake safety, so they can pass the knowledge on to their communities, especially in remote areas, said Kryspin-Watson.

Governments also need to invest in early warning systems like those in Japan, where sensors pick up tremors before the quake strikes, disaster experts said.

Even a 20-40 seconds warning can make a difference and save lives by giving people the chance to escape a building or get under a table.

"A lot more has to happen," said ADB's Sinha Roy.

"Earthquakes are not like flooding and other hazards that you can predict - preparedness always has to be a priority at both the community and city-wide level."